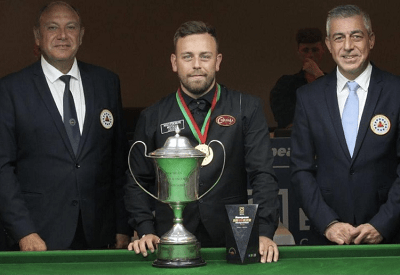 OLIVER BROWN will make his debut as a professional next year.

The 27-year-old Englishman scooped the European Amateur Championship in Portugal this week, which means he has landed a two-year tour card for the 2022/23 season and beyond.

Held at the Vidamar Hotel Resort in Albufeira, Portugal, 120 players from 38 different nations entered this year’s championship – yet more evidence snooker is expanding across the globe.

Waiting in the final for Brown was 22-year-old Ivan Kakovskii, who had already made history by becoming the first Russian to reach the title match.

The Saint Petersburg cueist led on four separate occasions, but the gutsy Brown levelled each time and took the front when it mattered most as he won the decider. It was only the sixth time in the competition’s history that the final had gone all the way.

First held in 1988, Brown becomes the ninth different English player to lift the trophy. He joins an impressive list of winners that includes Mark Allen and Luca Brecel.

If you want better results, then do this for longer…