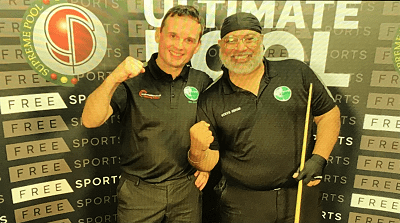 Steve Singh, 56, and Neil Davey, 50, managed to clinch the six-reds shootout in dramatic style by beating the time of paired favourites Oussama Masskini and Nigel Clarke.

Before the matches, Clarke and Masskini said they had known each other on the World Rules circuit and decided to pair up for the Ultimate Pool Pairs Cup.

On their attempt in the shootout, Masskini and Clarke ended up on a time of 35 seconds 84, whereas the “old-timers” on the pool circuit briskly made 32: 61.

It was all going swimmingly for Masskini, nicknamed the “small tiger,” and Clarke, both 29, until their last match of the group where they lost against Lee Briscoe and Glenn Cahir – both had been victorious in the amateur circuit by winning the St Helen’s Open events in Wigan, which forced the shootout

The group also consisted of a female pool duo who had eight world titles between them.

Emma Cunningham and Amy Beauchamp began their first match positively and began top of the group, but when they played the pairing of Singh and Davey, they were whitewashed 4 – 0.

Beauchamp is renowned for her unusual wild break on the table, but they found that some of the luck was against them as in one match, they had a Golden Break made against them by Nigel Clarke.

So far, the event has seen three-six-red shootouts, with one being a three-way one that involved the current World Snooker Champion Mark Selby and his brother-in-law Gareth Potts.

In the Ultimate Pool commentary team, they said that the beauty of the tournament was that there is a great mix of players not necessarily pros and even though one pairing might be the favourites to top the group, you just never know what could happen in something like a six-reds shootout.

It is the halfway stage of the event of a 21-week marathon event.

The UPPC can be seen every Monday night in the UK on Freesports channel 64, or on the UPG website.

Check out their coverage – now – here on the UPG website

Ultimate Pool Pairs Can Be Brutal…

Reach those awkward spots MUCH easier – EVERY TIME…