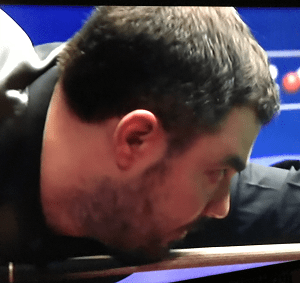 Kurt “The Viking” Maflin had the eyes of a tiger in the last frames of his second round encounter with the Wizard of Wishaw John Higgins.

His dogged determination came through at the end as it was a snooker battle of epic proportions with the Norwegian snooker player passing with flying colours.

There was barely a frame between them throughout most of the match, but as the match neared the winning line, Maflin upped his gears and in the final three frames he made three convincing breaks over 50.

This is the first time Kurt Maflin has rached the quarter-final stages of the World Championship, as in 2014/15 he secured his debut at the Crucible and was drawn to Mark Selby in the first round. He led 9 – 5 at one stage but could not seal the deal and Selby won that encounter 10 – 9.

In this year’s BetFred World Snooker Championship, fans are guaranteed a qualifier in the semi-finals stages as Maflin will play either Anthony McGill or debutant Jamie Clarke.

Said Maflin, 36: “It was a really good, hard-fought, entertaining game. I enjoyed it. It had everything, and it was a high standard. It was great to be involved in.”

He added: “At the interval I spoke to my dad and he told me to speed up because I was taking too long over shots. He said I’m good enough and I should go for my shots and keep focused. John made it so tough, I gave it everything in the locker. I was running out of gas at 11-10 down but the reserve tank kicked in.”

The maximum man John Higgins goes away with 55K – assuming no-one else makes a 147 before the end of the tournament. His incredible run of 16 match wins at The Crucible on the trot over three years has come to an end. Higgins appeared in three World finals on the spin.

He told WST after: “Kurt played amazing, to finish it the way he did. He bulldozed his way over the line. I’m disappointed because I had a chance at 11-10. When I come away from the tournament. I will reflect on the 147, but at the moment I’d swap that for a place in the quarter-finals.”