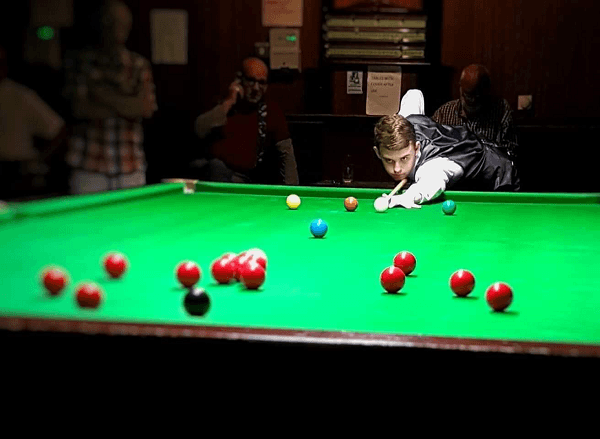 Ronnie O’Sullivan will soon have to move over… because there’s a new kid in town, ready to whirl the exhibition circuit!

Guinness World Record breaker Sean Maddocks performed out of his comfort zone at the weekend in his first ever snooker exhibition to a packed audience of around 50 fans.

Maddocks, who has been nicknamed “Mad Dog” for some reason, 16, who is the youngest to make a 147 in a open-aged amateur tournament, beating Ronnie O’Sullivan’s record in the Guinness Book of World Records, wowed fans at the Eastham Home Guard Club in Eastham in the Wirral on Saturday the 4th August.

The teen, a fan of the Rocket, and the Wizard of Wishaw, John Higgins,  said:

“I felt like I played well enough to entertain the crowd and I enjoyed every minute of it. I learned a lot from it and how to have a laugh while playing serious snooker and feel confident enough to do them more often.”

The young snooker whizz hit a string of 50+ breaks under a different type of pressure but almost racked a ton on three separate occasions, which was the only thing missing from the evening, said his coach Neil Johnson, who has been coaching the talented Maddocks since he was 10.

“It went great. Sean played very well. He rattled the inside of the jaws with the last red on 81 in the first frame before going 69, 68, 53, 45, 65, 66 and 63 over the next nine frames. He then played another two frames but was looking tired and lost the last one. It was a fantastic night and we got out of it what we were looking for which was to take him out of his comfort zone with something he hadn’t done before.”

He added: “He’s a fantastic example of an exciting modern player, technically very good but also quick and great to watch with an ever-expanding shot range.””He was one shot away each time and three tons wouldn’t have been generous. Another night and…”

Johnson said watching a new talent with all that unknown promise is as “exciting as it gets”, in his opinion.

He also said it was a very worthwhile exercise and would definitely be doing more of these exhibitions in future.

Maddocks played in Q School in May and came so near yet so far to turning professional during the events. See video below

The evening was organized by a couple of Johnson’s older students as a thank you for their help in helping him with training devices he is setting up.

One fan of the evening said on Facebook: “I loved it. Can’t wait for next time.”

A snooker exhibition is the cornerstone of a snooker player’s diet as they tour the country and the wider world showing off their skills they have honed for years of toil and sweat in solo and duel practice in their clubs.

Maddocks will be in Germany this month for the Paul Hunter Classic the amateur rounds and also the Challenge Tour.