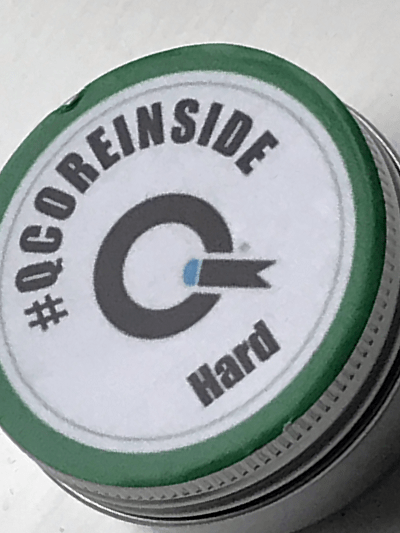 What unique tips are on the market at the moment? 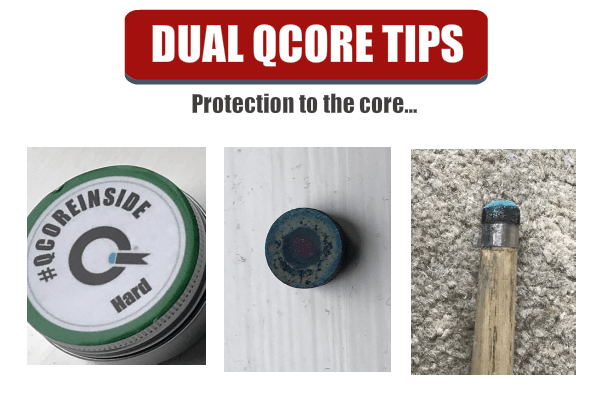 Yes, there’s “super” hard tips such as the Century G5 or the new Legends Xhard, both have been used by three-times World Champion Mark Williams, who’s tried more tips than hot dinners.

Yes, there’s fancy and good brands such as Century and Kamui.

But, is there something on the market that’s just that little different, but still plays like a “normal” tip?

Yes, there is: Qcore…

As someone who loves trying tips and reviewing them, when QTec Inovations announced they were launching a new product called Qcore, we had to get our hands on one.

We’ve previously reviewed here at SnookerZone a couple of QTec’s products and have always been impressed with their desire to create useful and innovative products.

Take the QCard Multi-tool for example. Simple, but very useful on all levels!

You have a bike. It has two tires. In the olden days, there were not so good inner tubes inside the tires but as the bike industry advanced, you got solid and more inventive inner tubes on bikes that helped protect the outer layers – i.e, the tires!. As a cyclist, SnookerZone has tried special foam tubes! Simply, that makes the ‘normal’ inner tube doubly hard for tubes/tires to puncture. Longer lasting tubes/tires.

Now, you might ask, what’s that got to do with snooker tips? A lot, actually.

On the Facebook Qtec page, they wrote: “Basically, think of it (Qcore) as a tip within a tip. As the outer tip compresses when you strike the cue ball with a normal tip, the tip distorts and contributes to deflection/throw that’s why lots of top players like using harder tips as it helps over soft ones.

Pressed tips when analysed under a slow-motion camera move around unbelievable amounts. Obviously, this isn’t noticed under normal conditions. The qcore tip stabilizes the whole tip from inside and as the leather compresses the core also has a contact effect on the cue ball.You can use a softer tip for better grip without the normal negative effects. It improves strength of the bond with super glue and cue (ferrule).”

So, the new Qcore tips take on a similar principle to bikes. There’s an outer core and an inner core. It’s designed to better protect the tip when it’s stuck down and helps to give less deflection when striking. As you can see from the image above, there is an inner core in the middle of the tip!

We ordered a hard, tin of 3 tips. Yes, these weren’t a freebie, but as we’ve said before, we believe in Qtec products and were happy to pay the £15 plus VAT for the tips.

When we opened the tin we were surprised at the firmness of the tips. They felt solid and when we stuck one on, we found it was very tough to trim with the tip sharpener.

When we tried taking the tip-off, we found it very, very tough! This is one aim of the inner core, to keep the tip solid on the base of the cue when it’s glued.

[bctt tweet=”You’d have to be superman to take it off! Seriously lol. Can you?” username=”@chrisgaynor2″]

On an initial striking with a cue ball, it was a rock hard sound, (Stoney). At the moment, we are using Russian Magic Chalk and found this spread well on the tip – despite the tip being rock solid!

We’ve reviewed the Centruy G5, and we thought that tip was hard! We would say the new Qcore hard tip belongs to one of the “super” tip family of snooker tips. There’s more and more of these coming around.

We actually measured the firmness of the tip with a Durometer. And on one reading, it gave a 97.5/98 reading. That’s hard! In the past, some “hard” tips we’ve reviewed have been hard, but on doing Durometer readings, they are actually sometimes softer than medium tips! Strangely, some tips on Durometer readings can show different readings to what the tip’s firmness actually says on the tin!

How the Qcore tip played on the table…

The Qcore hard tip takes a while to bed in and get used to if you’re not used to rock-solid hard tips. This tip is similar to the Century G5. Although, SnookerZone found the G5 was easier to bed in than the Qcore. However, because we’ve become accustomed to playing with harder tips, it didn’t take too long for us to get used to it.

NOTE: You may well be better off with a medium or soft tip in this brand if you don’t like very hard tips!

The tip produces a lot of spin from minimum effort and we demonstrated this on the weekend with various shots in frames, including.

The Qcore tip passed those tests with flying colors.

Do we recommend the Qcore tips?

Again, it’s purely down to preference! Our view is these are great if you want a tip that will “stick” for longer due to the core dual layer in the tip. We would definitely buy these again to try in a medium, as the hard ones can be a bit more difficult to trim (initially). We believe £15 for 3 is very reasonable for a new tip on the market.

They come in as most tips do these days …

You can try one out here