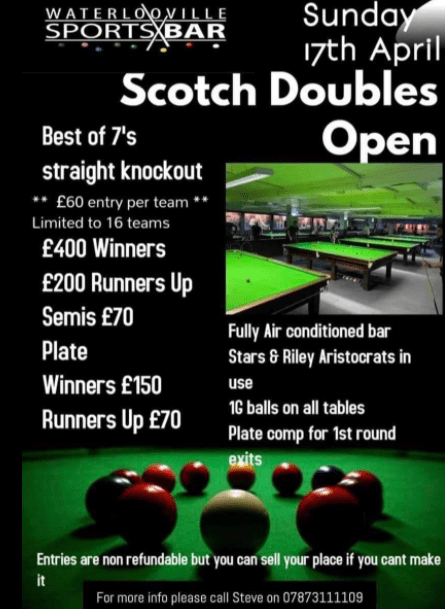 WATERLOOVILLE SPORTS BAR in Hampshire is to hold a Scotch Doubles event – a first – in 2022 – on the Sunday 17th April.

The event will see the winning pair bag a £400 first prize.

The first 16 teams to pay will be guaranteed a spot.

Professionals Mark Allen and Kyren Wilson made history in an exhibition in County Donegal, Ireland, making the first Scotch doubles 147 in 2018.

Before that, Allen and Wilson had been contesting the final of the Masters, to which Allen won.

Played more in pool than snooker, and was a contribution in the first Ultimate Pool Pairs Cup last year, Scotch Doubles are different from traditional doubles as players alternate every shot, instead of every visit.

Michael Day, of the Cue View, wrote at the time they made it: “It is not the first time Allen has been involved in a century break this way. At the 2011 World Cup in Bangkok, Thailand – when they used this format – alongside partner Gerard Greene representing Northern Ireland, the pair apparently racked up a 110.”

See the video below.

Snooker Mourns the Loss of a Legend…