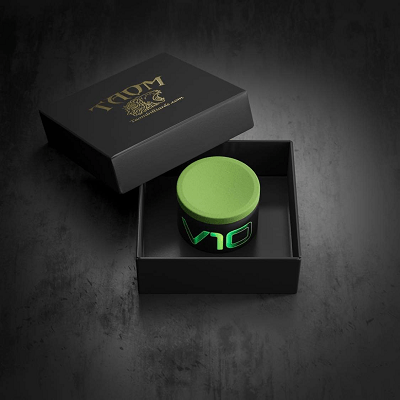 Since Finnish company Taom released their first chalk a few years ago and created a frenzy in snooker, the marketing of snooker chalk has become very creative – as Taom v10 chalk is launched.

Others have also been creative, such as Russian Magic, but Taom have put a lot of effort into the marketing of a snooker and pool chalk to produce a high-end snooker product.

Their slogan was Triangle, the King of Chalks…

But with Taom’s latest product the Taom Chalk V10, they have took on a motor marketing style campaign with the slogan, “Start your engines, it’s the v10.”

Vroom Vroom are the jokes circulating the internet as this chalk seeks to become Taom’s best yet. But is it?

Already, Friend of the website Michael Waring and Snookerhub founder, has said of the Taom v10,”I think it’s the best chalk I’ve ever used.”

You can read Michael’s review here after reading SnookerZone’s…

But before we start revving up the motor at full speed, there are certainly other chalks in the running for the mantel of best chalk in 2021.

Like, for example, the Russian Magic chalk. Or, the Glygen Contact chalk which is one of SnookerZone’s favourites.

Taom has come along way since Taom v1/2. Each time, they have tried to set the bar and produce a product that not only looks good but also plays well. So far, they’re achieving those two goals.

Is Taom v10 any different to the previous chalks from Taom? What does V10 do, per se, that Taom Pyro doesn’t, or, indeed, Taom gold soft?

Apart from the fact v10 is apparently a new secret formula.

SnookerZone took the v10 out for a test drive, and once getting over the excitement of actually owning one – it’s a bit like a kid with a new toy or a man taking his new car out on the town, we wanted to do the key tests to see what this chalk could do, and, if it was any different to say, Pyro.

Test 1 – Does Taom v10 produce much powder when in your hand?

When you rub it initially, there is only a tiny bit of powder, but not a lot, so like others before it, this chalk is clean and won’t mess up your hands like some others. The older chalks such as Triangle and such are very synonymous for that. Good start for Taom v10. But not a lot different to the others we have tried before.

As an aside, a fresh new Taom chalk, whatever version, does have a nice smell!

Test 2 – How long can you play shots before needing to chalk up with V10 again?

Surprisingly, with some of the others, particularly the earlier versions of Taom, you would need to chalk at least within three shots before needing to chalk up again. V10 was surprising, as we were able to go at least five shots without needing to chalk. Again, we wouldn’t recommend you don’t chalk for five shots, but, it showed that this chalk lasted longer on the tip, and that you can be assured that if you forget to chalk – you won’t get a miscue. Another bonus for v10. V10 is very similar to Russian Magic in this regard, which also allows more chalk to stay on the tip of the cue and not have to keep chalking every shot.

Test 3 – Does v10 mess the table with chalk marks?

SnookerZone thinks this is the no 1 chalk in the Taom family that like the others doesn’t produce mess around the table or produce many chalk marks. We can honestly say that Taom’s chalks are the best for this at keeping a clean table. Yes, if you look closely with a magnifying glass you will see tiny particles of dust from any chalk, but on the early eye, you will hardly see any. So, again, the question is, is this any different to the other Taom’s? The jury is out here at SnookerZone. Only time will tell as the block we use wears down.

We will come back to this post in time and update as the block is still fresh and so we will have to update and reveal what happens to the chalk when it wears down.

With some of the other Taom chalks, when they wear down, they can become a lot more powdery and create more chalk particles.

SnookerZone guesses if you were to go out to eat, and were on a tight budget, and you didn’t need the bells and whistles of fancy crockery or the style of how the food looks on the plate, you’d be happy as pigs in sugar. As long as you had some food in your belly.

There will be people who will be happy with the bog-standard Triangle or Master, and are not bothered about the bells and whistles of style. As long as the chalk sticks to the tip and produces a reaction on the cue ball, they’ll be happy.

However, for the snooker connoisseur, the benefits of having a clean table, being able to not have to worry about keeping chalking, or even just feeling like you are a pro at the table with a bit of quality in your pocket will mean those people will be happy to pay top price. Horses for courses.

We think V10 isn’t necessarily different from the likes of Pyro, or Gold soft, and if you’re happy with those chalks, then you may not need to upgrade to a v10.

It’s a bit like buying a car. If you’ve already got a decent Audi A4, why upgrade to another one, unless your needs have changed, of course.

Does SnookerZone think that the V10 trumps the Glygen Contact?

The jury is still out on that one as we use the v10 a bit more.

That’s not to say that the V10 doesn’t. It’s just personal preference.

What Taom would we buy out of all these?

Anyway, keep checking this page in the future as we update our feelings on v10…

PS: We did actually buy a block of the v10 off Ebay… However, Taom then sent us another pack of samples as there was damage from the original block and for being slow off the block. We are not sponsored by Taom or getting paid for this review…