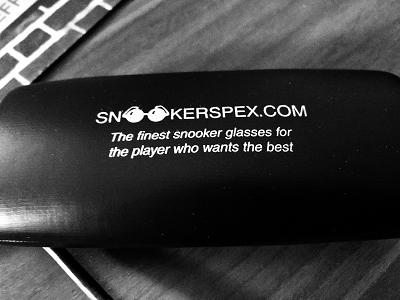 Based on the Legend’s famous 1985 style glasses, SnookerZone got to take them out for a test drive over the last few weeks in review.

We’ve reviewed two of SnookerSpex’s snooker glasses now, but Chris Cheshire was very kind in dropping out these for us to take a look at.

As usual, you come to expect quality and service from SnookerSpex, and this time was no exception.

Get advice before buying snooker glasses…

Funnily enough, we were talking to Chris about a recent potential eye problem and he told us that this was actually not as uncommon for snooker players as it might appear.

Vision out of glasses can actually be a problem for some players, depending on their eye issues. It is different for individual players.

In the glasses we tried before, we found the field of vision in the standard pair we reviewed wasn’t as good as the Blue Barons.

However, the Blue Baron glasses still had a bit of an issue with seeing the pocket in our eye line when down on the shot.

Chris Cheshire mentioned that getting the perfect pair of snooker glasses that suited a player’s vision was actually more of an art than a science.

You see, SnookerZone apparently has smaller eyes than average. For this, it means that sometimes, on the shot, we are only seeing a certain part of the field of the vision.

These glasses made that wider so we could see the pocket in our eye-line, but, as we say, every player is different and will need to think about what kind of glasses they choose.

Sometimes, we struggle to see the pocket in our eye-line, even with snooker glasses!!

Talk to Chris and he will be very accommodating based on your needs, and he knows his stuff.

SnookerZone would also add talk to your local optician as well.

And get an eye test every year!

Whilst we’re not going to go into the detail of our eye condition (it appears minor) at this stage, and is being monitored, Chris said it can be a challenge for people who want to play snooker and have a good field of vision.

He said: “It’s an unusual condition and particularly challenging for snooker players.”

In these, there was a much wider field of vision because the frames were taller and wider.

Chris told SnookerZone: “These are the closest to the Dennis Taylor glasses you can probably get.”

Pros and cons of the premium half-rimmed Dennis Taylor style…

These are quite an expensive option – but if you’re going to be playing regularly and are serious about it, then you sometimes have to buy quality.

Also, these probably offer the best field of vision in snooker glasses.

However, if you’re just a casual player, then probably you would be better off with the Propeyes option.

SEE ALSO: Our detailed explanation on snooker glasses and the review of the standard pair by SnookerSpex.