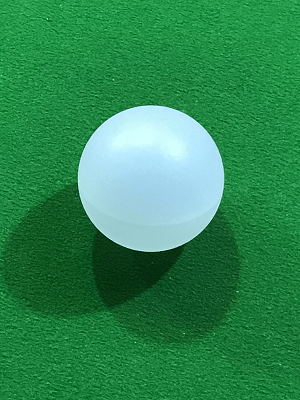 What if there was a way to discover whether you were putting on unintentional side on your shots or not? Would you want to know?

The solution: A specially weighted cue ball that reacts when you put side on and shows you what’s happening before your very eyes! So that you can correct your cueing errors and cue in the middle of the ball…

One of the most difficult aspects of the game is being able to strike the cue ball dead centre on EVERY shot.

You may think you are, but, chances are, you’re not.

Now there’s a way for you to find out whether you’re putting left or right-hand side on the ball – unintentionally!

This is where this training aid, The Aim Ball, will come in handy. With a standard weighted cue ball, knowing EXACTLY how much side you’re putting on isn’t always obvious unless it’s EXTREME.

But with a SPECIAL weighted cue ball, you can SEE instantly if you are striking the cue ball dead centre.

What is the Aim Ball and how does it work?

The Aim Ball is a SPECIAL weighted cue ball that will tell you if you are striking left or right by VEERING either left or right when struck.

A drill you can do with the Aim Ball…

Place the Aim Ball on the table towards a pocket. Strike the ball firmly and then WATCH where the cue ball goes.

If the ball goes into the middle of the pocket, then you are striking the cue ball dead centre.

However, still be AWARE of what is happening EVEN if the ball goes into the pocket. It may be you are still putting a TRACE of left or right side on.

The object is to WATCH what the ball does, and to adjust your aiming with the tip to eventually STRIKE the ball centre and for it to go in the pocket middle.

How does the Aim Ball help you?

Snooker is a game of repetition, and, like any practice, you will need to keep repeating DRILLS that are set out in a VERY SIMPLE to read Ebook which comes with the product. These drills also come with RECORD SHEETS you can print out so you can record your progress on this aspect of the game.

The Aim Ball is designed to help a player train their eyes to overtime RECOGNISE where the dead centre of the cue ball is on a NORMAL cue ball and to be able to strike the tip at that point.

Who can use the Aim Ball?

SnookerZone has used this product now for three weeks. Although we are not a beginner, this product is perfect for a beginner who is FAIRLY new to snooker and doesn’t understand FULLY the impact of side and what it does to the cue ball.

This product, in our opinion, is a GREAT product for beginners in the game. But it is also useful to anyone who wants to know if they are putting side on the cue ball and how much. Over practice, you will eventually be striking dead center.

Surprisingly, when SnookerZone did some of the basic drills in the ebook in our first session, our strike rate was 7/10. That’s to say, on 7 shots the ball was going in the pocket, if a little to the left. This is where adjusting comes into play.

On our second week of drills, the rate was higher. We were getting nine of the 10 shots into the pocket. Again, we were still noticing that we were putting on a TRACE of left.

What will the Aim Ball teach you other than the impact of side?

This training aid will actually TEACH you a lot more than just striking the cue ball centre. It will also get you to think about your setup on the shot and make you aware of what you are doing when addressing the cue ball.

SnookerZone found when we SLOWED our approach down on the shot and TRAINED ourselves to be more consciously aware of EVERYTHING going on and where the tip was pointing, we found our game in terms of cue delivery IMPROVED dramatically. Most beginners (and some intermediates) will get down on the shot and not be “consciously” aware of what they are doing. They just want to get the shot over and done with. We’ve done it ourselves.

If you take just that EXTRA couple of seconds and THINK about what’s happening, you will find your game will IMPROVE much quicker.

How much is the Aim Ball?

You have the option to pay for just one Aim Ball or three. One costs 30 dollars.

Absolutely yes. Caveat though: You may think you are better and MORE than a BEGINNER, but if you think it’s TOO basic for you, then you would still be WISE to give it a go. There’s always something NEW to learn or to FIND out you may not know about with your game.

GET 15% OFF THE AIM BALL WITH SNOOKERZONE! 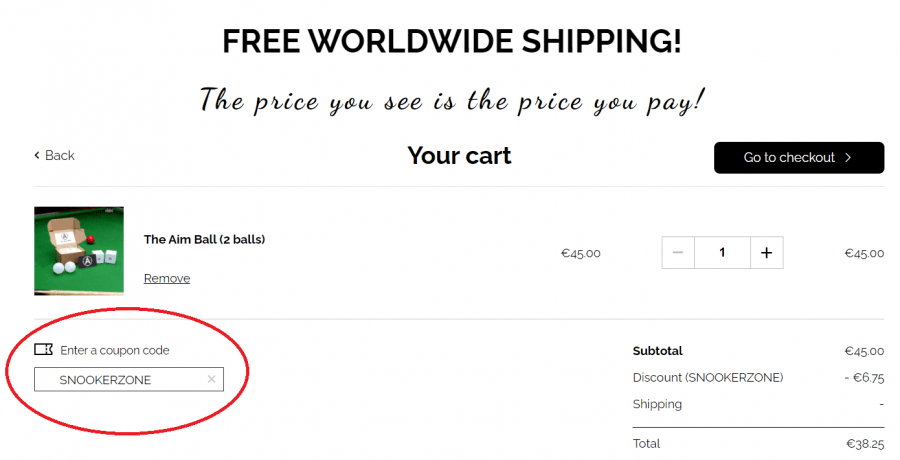 LEARN TO STRIKE DEAD CENTER WITH THE AIM BALL – NOW

PS: We’ll post our own video in action with the Training Aid on here – soon. With any training aid, you need time to practice with it and record and analyse your results.