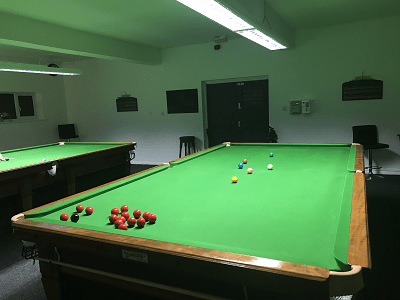 Last week, SnookerZone went to a great new training facility in West Byfleet, Surrey, to have a coaching lesson with top WPBSA and trained SightRight coach and friend of the website Brian Cox on the SightRight system that is currently taking the professional and parts of the amateur game by storm.

For those who don’t know or haven’t heard of SightRight, here’s a brief summary…

It’s actually been around quite a while, with cues, but since 2015 and Stuart Bingham winning the World Championship, that’s when it really started to take off.

The former 2015 World Champion credited part of his win to “practicing the old SightRight techniques”.

SightRight: There are three initial aspects (or three simple tests).

3) How your vision center is when your cue is down on your chin.

The Dominant Eye Theory and Vision in SightRight

It’s based on your dominant eye but more than that, it’s based on establishing if where you are standing now when you’re playing is right.

It can be a confirmation of what you’re already doing.

Here’s what happened to SnookerZone…

We did the three SightRight vision tests.

SightRight Test One: Standing up off the shot…

In all the tests, the lines on the board have to line up straight and that’s how you can confirm your vision centers. If the lines are broken, you are not on the right lines!

That works by you shifting your (body/legs) left or right so that the lines join straight.

SightRight Test two: Dropping the cue on the line…

2) But when we did test two, the test showed us that when we dropped the cue onto the line we were actually moving slightly to the left and the cue was going offline!

This was rectified by our coach pointing out that we were moving our body (and left leg) too much to the left and that was bringing the cue offline. We had to walk straight in without shifting our body to the left, just using the muscles in our left leg! It was rectified in two minutes!

Watch the video to see how this issue was rectified…

3) When we did the chin vision centre test, we passed, as our natural vision center for the cue on the chin was just right of the center chin. So no need to change it – although we could move more – but it didn’t make too much of a difference in the vision center. We are right eye dominant but didn’t need to move anymore to the right with the cue.

Doubts can creep in if you don’t know your true vision center lines. SightRight can help you avoid those doubts…

Now we know what our sighting line is on the shot and how to drop the cue down onto the right line without going offline, we can just now focus on playing snooker and employing the basics of course.

Even established coaches are learning from SightRight Training…

Brian Cox said when he was doing the training with Feeney to become a certified SightRight coach, he had gone through the tests, and even he found a couple of faults in his own setup that were rectified by the system.

Will SightRight improve your game?

Like anything, it’s practice. It’s not a magic solution, but it will help you take doubts out of your game to stop you from asking questions such as…

Am I set up on the shot right?

You want assurance in this game as there are so many variables that can go wrong.

The game is difficult enough without having that to worry about while you’re playing.

Using SightRight in practice and in matches – how did we get on? First impressions…

When SnookerZone put what had been learned into action, there was a newfound confidence in our game.

Already, in practice frames, we felt more confident about knowing we were on the right line, especially when dropping the cue down onto the line, and being able to just focus on playing the game and enjoying it more.

There must be something in it because we won practice frames 2 / 1 with a mate and made a fantastic colours clearance in one where the balls were in tough positions and they were all potted with confidence.

When we entered the weekly handicap tournament at Woking, we also won a frame in the same vein by making a colours break with the balls in tough positions as well.

SnookerZone would say there are three takeaways from this SightRight training…

This is obviously a work in progress, but we can honestly say that there is a lot in this system that can improve your game by two things…

Tick this off your list and remember, practice makes perfect!

PS: We are not in anyway affiliated with SightRight and this post is based on our own experience of having had the training with a certified coach…

Watch: An interview with SightRight coach Stephen Feeney and another one Stuart Pettman!