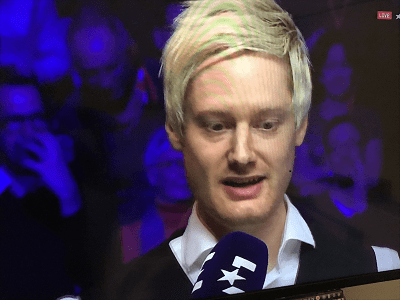 Neil Robertson yet again has bagged another trophy for the ever-growing cabinet – this time his 18th ranking title at the 2020 Coral World Grand Prix – making it three final appearances in three weeks.

He defeated the 2006 World Champion Graeme Dott in an explosive and thrilling final which saw the 37-year-old Australian make five tons including a 142 and a 127.

However, the Thunder from Down Under did not have it all his own way, for at 9 – 5 up, his form began to dip and Dott, 42, took advantage, and, clawed his way back to 9 – 8. In the final two frames, Dott needed two snookers and got them, before potting a brilliant steely final black to go 9 – 7. Unfortunately, in the last, Dotty couldn’t repeat the tenacity of the previous and get the frame to force a decider.

Dott joked after: “Neil wins a tournament every week, I’ll probably win one every 14 years.”

The Scot has not won a ranking event since 2007, but in recent times has made the finals of the Shootout and the German Masters as well as the Grand Prix.

Robertson’s titles include so far this season:

Robertson paid tribute to Dott in the final after and said Dott’s safety was awesome and said it wouldn’t be long before Dotty was lifting silverware again.

In three weeks, Robbo has bagged over 200K in prize money – with bonuses also in the offing for the BetVictor European series, and, potentially, the Coral Cup.

Neil Robertson is second to Judd Trump in the rankings and the domination of this season, with Trump winning four ranking titles and Robbo two so far.

Robertson will be defending his Welsh Open crown this week in Cardiff.

There were also good runs in Cheltenham for Leicester’s Tom Ford, whom Dott defeated in the semi-final and on the way, Dotty also despatched of the five-time World Champion Ronnie O’Sullivan.

Robertson had a tough semi-final match with Kyren Wilson.

Dott and Robertson played in the 2010 World Championship final.