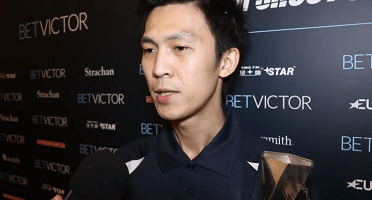 Humbled by his talent and victory, Thailand’s Thepchaiya Un Nooh cruised to his first ranking title over the weekend.

Un Nooh, the fastest player on tour, racked up a whopping 213 points in two frames in the semi-finals and final respectively with breaks of 139 and 74 in snooker’s fast and furious Shootout at the Watford Colosseum. He’s the 27th player to have won just one ranking event – compared to Hendry, who has won 36…

He beat the Hitman Michael Holt, who was appearing in his first ranking event final since the Riga Masters a couple of seasons ago when he lost out to Neil Robertson. For Un Nooh, it was an emotional scene as the Thai became the second Thai to win a ranking event following on from James Wattana’s Thailand Masters in 1995. Thep bagged 32K and potentially gets himself into the Champion of Champions later on in the year.

The 2019 edition of the Shootout saw four days of thrills and spills with a mixture of old and new talent on show -, especially from the amateur ranks. There were approx 25 amateurs on show, including two women which gave fans a short if not inconclusive taste of what talent was on offer outside of the professional bubble. The amateurs fell by the last 16.

The most notable talent who reached a last 16 placing was 16-year-old Ryan Davies, a fearless long potter and English junior amateur champion, who showed he was developing an all-around game beyond his years, but he couldn’t overcome the experience of the finalist Michael Holt in the last 16.

Snooker’s Rod “The Plod” Lawler “Plodded On” to Quarter-finals

There were also great performances by Rod Lawler, reaching a second Shootout quarter-final and Rod the Plod, as he is nicknamed, although not the fastest player in the game, seems to hold himself well in the Shootout with his wealth of knowledge on tactics and safety.

It was an also positive experience for Welshman Jamie Clarke, whose first year as a pro – saw him reach a semi-final in Watford, as the Welsh Whirlwind, as he is nicknamed, came onto the tour through the EBSA playoffs. He had previously lost 13 matches before coming into the Shootout, but he then won five matches on the bounce.

Runner-up Michael Holt said after the event of the whole event: “It’s 10 mins of chaos but it is what it is..”

Here’s what Thepchaiya said after to World Snooker…

A poll SnookerZone conducted sees a tight result with 90 votes so far, but it seems 51% are in favour of the Shootout seeing it as giving snooker a good image…

Thepchaiya’s 139 was the highest break in the history of the event – pipping former German Master Martin Gould’s 135. Gould had made a 100 in this edition and Brecel and Walden made 133 and 132 respectively early on.

If you missed it, watch Thepchaiya’s 139 below…

A special message for those who visit SnookerZone regularly…