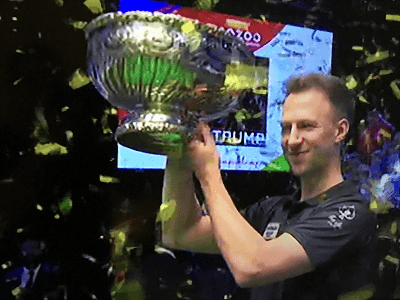 Judd Trump has claimed his first Champion of Champions, sponsored by Cazoo, in Bolton at the weekend.

It was comfortable pickings for Trump after the afternoon session ended tight at 5 – 4, after Higgins had taken a 3 – 0 lead early on.

But, whether it was tiredness from Higgins,now 46,  due to his marathon semi-final clash with China’s soon-to-be No 1 player Yan Bingtao, Higgins denied it was.

However, Trump came out of the blocks in the evening and won all five frames he needed to add what fans now view as the fourth major event on the calendar.

Both Higgins and Trump were gracious in their victory and defeat speeches.

He added: “He just blitzed me tonight. Far too good.

Trump told ITV4 after that the crowd in Bolton had been great all week, as he had only dropped at least five frames in the whole event.

He said: “Any win against him (Higgins) is special.”

“There have been times when I was first coming through where I’ve been 4-0 up, 7-2 up, and every time he comes back and beats me. There was a bad one in Shanghai which I will never forget, but it’s put me in the position that I am today. I still learn and I am still willing to learn from him. I have the utmost respect for John.”

ITV4’s Rob Walker congratulated John Higgins on his new image on losing almost 4 stone in weight. The crowd clapped in acknowledgement of the achievement.

Yan Bingtao very nearly defeated Higgins in the semi-finals in which was an epic thriller and didn’t finish until just after 11:30 in the evening.

Bingtao, 21, who won the Masters back in January,  has been tipped by many in the game to win the World Championship – even before Ding, who has come close, but not yet won the title.

“I think he will win the World Championship within the next five years.”

He said Bingtao was not a flair player like Ding and didn’t have necessarily the same break-building qualities, but he has an all-around game and added…

Higgins had reached his third final in a row and was naturally disappointed to lose.

He added: “That’s obviously an achievement, but you want to win events. It’s not a great feeling. I can hold my hands up and say I’ve lost to three unbelievable champions.”

In other snooker news… 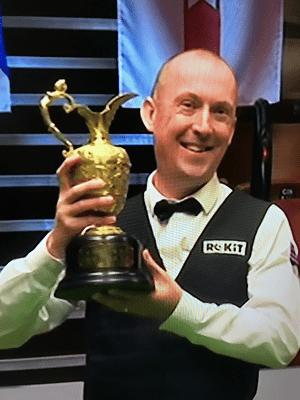 The first EPSB QTour (replacing the old Challenge Tour) before the pandemic struck got back underway as well at the weekend.

This event 1 was held in Brighton at the Castle Snooker Club and saw former professional David Lilley defeat China’s Si Jiahui 5 – 1 in the final.

David Lilley had actually played earlier on in the week at the Champion of Champions because he had managed to earn a place through winning the World Seniors Championship but lost to eventual winner Trump in the first round.

The second QTour event will be in Wales at the Terry Griffiths Matchroom in December on the 10th – 12th.

There are four in total.

Due to the Corona virus pandemic still prevalent, the World Snooker Tour is shorter and there are fewer worldwide events due to travel restrictions and countries not yet on top of the virus.

There are events in Germany, Belgium, and Gibraltar, and of course, most in the UK, for now.