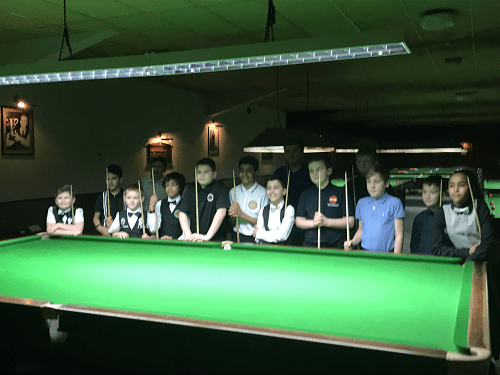 Woking Snooker Centre hosted its second junior event this weekend – in the space of three months.

Last year in early December, the Surrey-based club saw the Cuestars Under-21 event return to Woking for the first time since 2016, and on Saturday 5th March 2022, the English Partnership for Snooker and Billiards Under-14 southern event rolled in – sponsored by PowerGlide.

Woking Snooker Centre manager Peter Ruddick said the club were keen to host more EPSB events in the future and are looking forward to hosting another Cuestars event, the Seniors in May.

The club has been praised for its centrality to snooker in the south and its facilities.

Up to 14 talented juniors were on show, with one hoping to make it to the EPSB Finals Weekend in June.

There was also a northern event with another 14 players competing at the Hazel Grove Snooker club near Stockport.

In the southern section, there were a few recognizable faces from the Cuestars Under-21 circuit, including Harry Wyatt and O’Shay Scott, who both reached the final of the semi-finals in Woking.

But it was O’Shay Scott who was victorious in Woking, defeating Wyatt 2 – 0.

In June, he will battle it out with the northern winner who was Vladislav Gradinari from Moldova, aged 13, who beat English boy Jack Wilding 2 – 0.

O’Shay Scott, 13, recorded a high break of 90 during the event, but it was Gradinari in the northern section that made an incredible 111 break, the highest of the Championship so far.

The English Partnership for Snooker and Billiard’s focus for juniors is to hold friendly but competitive action for youngsters – similar to that of the Cuestars events run by coaches John Hunter and Tim Dunkley.

Well over 100 players have taken part since the tour returned after the last year and a half or so of a pandemic.

Stan Moody, now 15, who made his debut as an amateur in January this year at the professional event the fast and furious Snooker Shootout, and won his first-round match, won the event back in 2020 and 2019.

Much is said and written about the lack of young future talent coming through in snooker at amateur level in the UK, but it is events like these put on by Cuestars and the EPSB that can help to provide friendly competition at an early age for youngsters who may have the desire and determination to go on and see how far they can go in the sport – should they wish to.

But more does need to be done with not just events, but also providing link ups to different aspects of amateur snooker such as promotion of snooker leagues, etc.