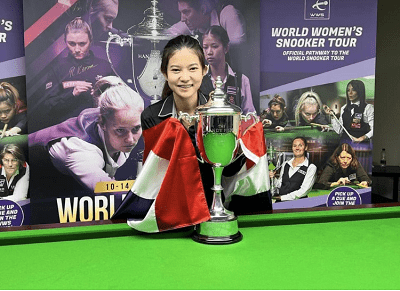 Thailand’s Nutcharut Wongharuthai has graduated onto the World Snooker Tour by claiming the 2022 World Women’s Championship in Sheffield – played at the luxurious Ding Junhui Academy.

The 22-year-old defeated Belgium’s Wendy Yans in a thrilling comeback from 5 – 3 down in a best of 11 frame encounter.

For the first time in a while, Reanne Evans, the 12-time Champion, and Hong Kong’s Ng On Yee, both got knocked out of the event in the quarter-final stages, which meant there would be a new champion lifting the trophy.

Wongharuthai is the third female to get onto the main tour within the last three years.

She is most famous for playing in the fast and furious Snooker Shootout and breaking off and then having a century made against her by Rory Thor.

Her other claim to fame is being the first woman from Thailand to make a 147 in practice at the Hi-End snooker club.

On a Facebook page related to Yans, it wrote: “Well, wasn’t meant to be. Lost 6-5 on the final black.

Didn’t play well in the final which is a bit of a disappointment because I played alright in the matches before. In the end, I got a bit tired. It was a long day. I’m not 20 anymore you know

No, just kidding.. big congrats to Mink and good luck with your tour card. In a couple of weeks off to Qatar for the ibsf world championship.…

Woking’s Jasmine Bolsover reached the last 32 of the event, losing to Emma Parker, and did one better than she did when she was a young teen when she didn’t make it out of the group stages group D in 2015.