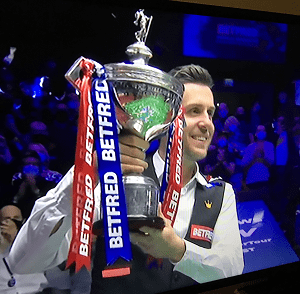 The 38-year-old former 2006 World Pool Champion was competing alongside his brother-in-law Gareth Potts, for the first time, also a World Champion in both pool and Chinese pool.

Their campaign was kickstarted by two 4 – 0 victories early on in the round-robin rounds but they then struggled in their third match losing 3 – 1, which meant they would be part of a three-way six-reds timed shootout.

This is where the players have to pot six reds from the break-off in quick-fire time and the quickest time gets through.

Selby and Potts, nicknamed The Golden Boy of 8 ball, had to beat 26:02 seconds – compiled by one of the opposing teams of Jez Graham and Darren McVicar and Zak Shepherd and Andy Cragg.

The Jester from Leicester was using his own snooker cue – a Stamford cue. The others, such as Andy Cragg were using a Woods cue.

BROWSE WOOD CUES AND GET 5% OFF NOW WITH CODE “SNOOKERZONE”…

McVicar is known to have made a quick 147 in snooker beating O’Sullivan’s 5:08 seconds, but it’s only in practice.

They had apparently been practicing the six reds shootout quite a lot and managed to beat the 26:02 seconds by two seconds!

Selby, who had started playing pool when he was 7, said before the matches he was really looking forward to being back on the small table and commended the new setup of the Ultimate Pool team who have been creating new and innovative events to bolster the image of 8 ball pool which has been available on Freeview channel Freeport’s every Monday.

This unique event carries a total prize fund of £32,800 – features 64 teams of two players. Played on Monday evenings and spanning 21 weeks, each night’s action will see a round-robin group of four pairs. At the end of each night, the pair finishing top of the group will advance to the last 16 of the competition.

Selby’s appearance in the tournament continues as he and Potts progressed.

His 8 ball appearance followed the appearance of 2019 World Snooker Champion Judd Trump in the US Open 9 ball where Trump flew to Atlantic City to compete for the first time as the first snooker player in the modern era to compete in 9 ball, early on in the month and managed to get to the third round before being eliminated.

Likely to have been in front of 8-ball pool’s largest ever live tv audience, 𝐌𝐚𝐫𝐤 𝐒𝐞𝐥𝐛𝐲 & 𝐆𝐚𝐫𝐞𝐭𝐡 𝐏𝐨𝐭𝐭𝐬 come through a 6-reds shootout to qualify for the last 16 of the Eative Ultimate Pool Pairs Cup.

Each match is limited to 20 minutes; matches are a race to four frames or whatever the score is when the 20 minutes expires.

If teams are tied at the top of the table after they’ve completed all matches, a 6 Reds Shootout will determine the winners.

BROWSE WOODS SNOOKER CUES HERE & GET 5% OFF WITH CODE “SNOOKERZONE”