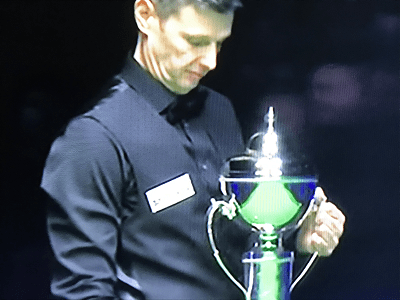 PETER LINES almost let slip that Santa was just a myth as he lifted his maiden 2022 UK Seniors Championship title at the Bonus Arena in Hull.

The 52-year-old was speaking after the 4 – 1 win over David Lilley and almost gave the game away in front of his young son Leo whom he said was his “lucky charm”.

The slip came as Rob Walker was confirming whether his son would get any more presents after the win, before Lines went onto say “we’re still paying off” his Christmas presents.

He looked over to some members of the audience.

He quipped – Oops…Yeah, Santa got him his presents for Christmas, didn’t he?

Lines also has an older son, Oliver, also on a snooker journey.

Lilley, a late developer in the game of snooker, well into his 40s, said he was naturally a bit nervous coming into the final of the UK Seniors Championship despite being World Seniors Champion.

He said: “Yeah…This isn’t Gateshead Snooker Centre Pro Am. This is a BBC event in front of crowds.”

He added: “If you’d told me before the start of this I’d be in the final, I’d have bitten your hand off.”

Lilley, on route to the final, beat the people’s favourite Jimmy White, whom he had beaten in the World Seniors final. Lines managed to also come through a tough semi-final against the 1997 World Champion Ken Doherty.

There were two centuries made during the three-day event with Wayne Cooper making a brilliant ton early on against 1991 World Champion John Parrot, on his debut.

Lilley took the high break prize though in the end with a 109.

Hull is slowly becoming another hotbed for snooker with the likes of the Tradewell Snooker Club where some of the World Disability events are played each year.

Although the doors are opening for less well-known faces to shine on the World Seniors Tour, legends of the game are slowly packing up their cues and turning to the commentary box

Cliff Thorburn, 73, officially retired from competitive action and was given a lap of honour at the Bonus Arena parading the trophy he won in 1980. Thorburn was also the first man to make a maximum at the Crucible Theatre in Sheffield in 83 and also the first overseas player to win at The Crucible before Neil Robertson in 2010.

There’s still yet to be a World Champion from China with Ding Junhui coming very close in 2016.

He told a humbled and knowledgeable crowd: “It’s over”

He remarked about spending his time in the company of legends such as legend Joe Davis, particularly playing poker.

Thorburn turned to do some commentary throughout the UK Seniors Championship alongside Dennis Taylor and Mike Dunn and co.

There was a hint that the Bonus Arena in Hull would be a regular venue on the World Seniors Tour in the future as WPBSA Chairman Jason Ferguson said “we like the people here”.

The final saw the newly elected 2020 Lord Mayor of Hull interviewed, Councillor Lynn Petrini, who remarked that she wanted Hull to become a second snooker hotbed, just like Sheffield.