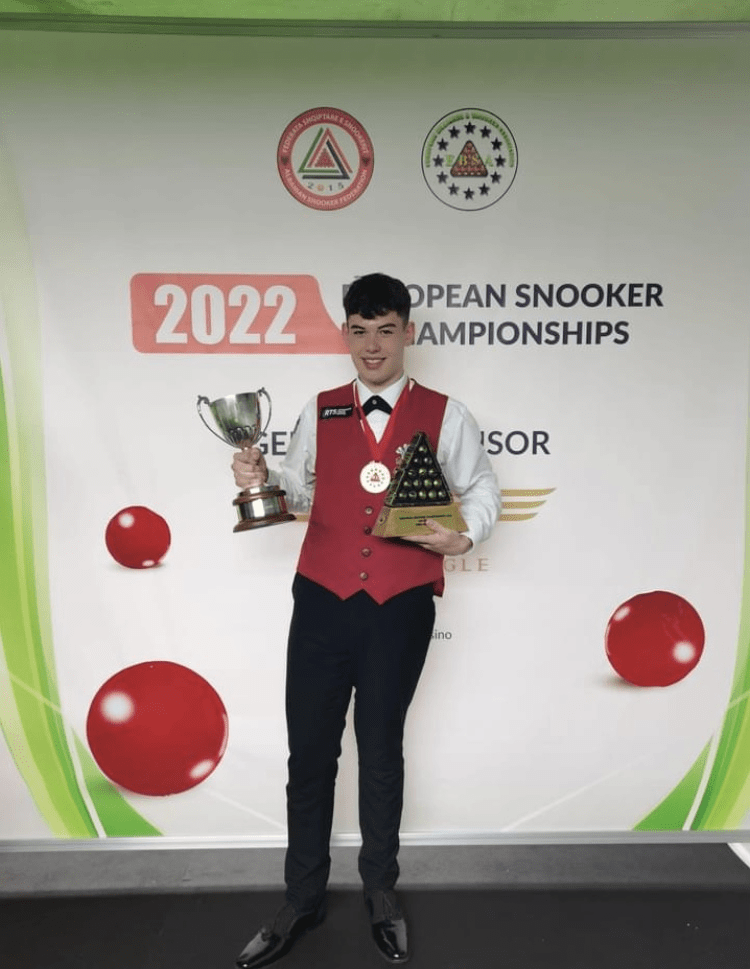 Davies became the youngest player in the World Snooker Championship this year to win a qualifying match at the qualifiers at the English Institute of Sport.

The kid from Tredegar defeated Leone Crowley 4-1 in the final to win the 2022 EBSA European Under-18 Snooker Championship in Shengjin, Albania.

Davies is a member and rising star of the SightRight Global Cue Sports Network team under the umbrella of Stephen Feeney.

He added: “Proving yourself as the best u18 snooker player in Europe at just 15 is something special and I know your parents are so proud of you today, as am I and I’m sure Lee Walker too.
You are a huge talent in your own right – entirely dedicated & focused as a snooker player and a Winner 🏆
You are also a huge credit to Lee Walker, SightRight & SightRight Methods, all the way from our SightRight Elite Junior Coaching programme in Gloucester to your success today. You are showing how important SightRight Coaching is to the Junior game in raising standards 🏆. I am so pleased for you, your parents, your family and Lee #EuropeanU18JuniorChampion #sightright #snooker 🏆

Davies is following in the footsteps of a few talented Welsh players as Wales has always been a hotbed of snooker talent with the likes of Mark Williams and other mentoring and coaching younger players and using the SightRight methods.
A month ago or so, Lee Walker claimed the World Seniors Snooker Championship at the Crucible, proving that SightRight methods are universal to the young and the older generations, with Williams having won a World title in 2018 after taking up the coaching method himself.

At the World Championships this year in April, Mark Williams played his protege, the young Jackson Page, who he said he had treated like a fourth son, rather than just a friend and mentor.
Commenters on Twitter compare the maturity of Davies to a young Ronnie O’Sullivan, who won his first World ranking title major, the UK Championship at 17, just two years older than Davies.

Thanks to my family
my sponsors
Refrigerated Trailers Merthyr (Steve McCue)
Baize Sports Supplys
(Brian Crook)
Scala Snooker club
Mark Williams MBE 😉
And my coach Lee Walker World Senior Champ 💪
Without you all this could never of happened 👍👍🙏 https://t.co/8oItWoy3wc

SnookerZone congratulates Liam Davies and wishes him well in his snooker career!