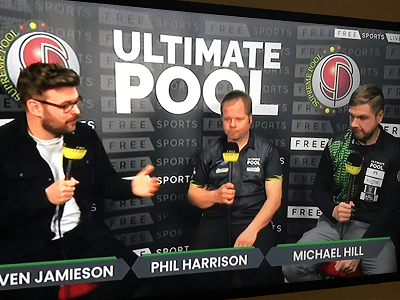 8Ball Legends Michael Hill and Phil Harrison sailed into the last 16 of the Eative Ultimate Pool Pairs Cup on Monday.

As the stand out favourites on Week 11, the two Aces of 8Ball didn’t disappoint as they won the Group with a match to spare.

The 48-year-old Harrison, and the 41-year-old Mick Hill, with 7 World Pool titles between them, had little problems coming through the Group 11 as their only other rivals included the unusual pairing of Carl Morrris and 17-year-old professional Geo Edgar.

Harrison told Ultimate Pool after: “It was a pretty intense first two matches.”

Morris said of the pairing before the match that Edgar, a talented up-and-coming player, reminded him of how he was at that age and that he had a mature head on such young shoulders.

Both Morris and Edgar were the other two Ultimate Pool pros on show.

The 44-year-old was the youngest World Pool Champion at 21, similar to Stephen Hendry in snooker, who won the World Snooker Championship at 21 as well.

I’m sharing this again because the news way to big to just share the once!

IMO this is the biggest thing to ever happen to 8 Ball Pool. https://t.co/HJCupPyaHF

Mark Selby, who’s also playing in the Pairs Cup, is the only player to have been World Champion in Pool and Snooker.

In the final match, Hill and Harrison treated the crowd to some exhibition play as Hill cruised around the table on auto-pilot as they wrapped up a 4 – 1 victory lap over Matt Baddrell and Craig Baller to ease through into the final stages of the 21-week marathon.

Social media followers after the match said it would be very tough to not see Harrison and Hill lift the Pairs Trophy in Newcastle-Under-Lyme.

Big things are happening in 8 Ball!