Snooker or full-time motherhood? What would you choose? 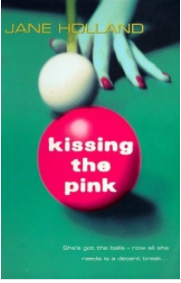 Is tough in a man’s world. Especially the snooker world.

But Zoe is different. She gets her first taste of what it’s like to be a female snooker player in a man’s world, and she wants more.

She has doubts about her ability. Fears that she is abandoning her kids to pursue her dream for a sport played in dark dingy clubs with drunken men, all leering at her up close – more interested in what’s underneath than what her skills are on the table.

She doesn’t care though. She’s strong.

None of it deters her from following her passion! She gets the cue out again and again and again. Because, man or woman, snooker is like a drug. Once it has you, it’s got you.

And you’ll find yourself wanting more and more.
Kissing the Pink is a satirical novel by Jane Holland, now 51, an ex-female snooker player, and award-winning author who played on the women’s tour in the former years when the ladies tour wasn’t as talked about as it is now.

In that era, you wouldn’t have ever imagined a ladies player could play at the World Championship – heaven forbid if one was to beat a top male player there!

The book charters the fictional character Zoe, wannabe Champion snooker player, desperate to rise the ranks on the Ladies Tour.

But she is at every attempt pushed back by the very fact she is a woman, and “women can’t play snooker”, as described by one male chauvinist in the book.” Ironically, how things have changed now – slightly, anyway…

With women like Reanne Evans and Ng On Yee making headway in a male-dominated sport, this book lets you know how tough it was in that era for women playing in male-dominated clubs, and with chauvinistic men who think women should be tied to the kitchen sink or tied to the bedroom rails.
There are still those ego-centric chauvinist characters still around today, pontificating about why women should just be serving them drinks at the bar in short skirts and low cut tops and not striding around the table making big breaks in waistcoats!

Let’s go for a ride…

Canadian Mordecai Richler, in his book “On Snooker” suggested that Kissing the Pink would have been better as a non-fictional account – rather than a fictional one – I disagree.

The characters all speak for themselves, and when you read through you really feel like you are in the room, (or club) watching them play and watching the banter, the rivalry, the female wit, and the dry sense of humour.

It all adds to the atmosphere of the ride.

Don’t be fooled. Zoe is not your average girl. She likes a flirt,. She likes banter. And she doesn’t suffer fools gladly. But even she needs help to battle the sexist lynch mobs.

I liked the way Zoe had the struggle towards the end of whether she should go all out and play snooker full time, or give in and just be the dutiful mother with any old job.

Ironically, it’s the kids who cheer her on the most. Her daughter is her world, but she finally accepts her mother is a snooker player at heart.

However, if you look deeper, there are some tips in there for both men and women on the mental aspect of the game.

Not a tips book…

What the book does teach you – regardless of gender, is – never give up on your dream.
Never let those with narrow minds deter you from getting what you want. Never let society tell you what you should be, do, or say. Never let them win.

A previous reviewer of this novel wrote: “Jane Holland’s first novel reflects the fortunes of its main characters–a woman author is almost as unfamiliar a sight in the male-dominated world of sports writing as Zoë was in the Working Men’s Clubs. But Holland takes on the competition with passion and style. Adopting the language of the snooker hall, she gives a vivid insight into the closed, masculine world of smoky clubs and all- night drinking sessions in a prose that is both animated and accessible.
But more than that, it is knowledgeable–Holland is not a woman with time on her hands who likes to shoot a few balls now and again. As a former champion snooker player who achieved world ranking, she certainly knows her stuff and readers will learn as much about the techniques as the morals of the snooker hall. This is a very welcome addition to that all-too-sparse genre: goodsports fiction.” —Lucie Naylor

Kissing the Pink is available on Amazon in Paperback and on Kindle.

Go read it and weep now. Not.