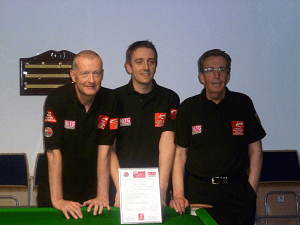 Snooker is supposedly one of the most popular sports played, and watched, along with football.

According to reports, there are estimated to be circa 1,500 clubs in one part of China alone and around 60 million people playing.

Juxtapose that with the 18.5 million people in the UK who stayed up late in 1985 to watch Dennis Taylor pot the final black against Steve Davis.

But, despite the incredible figures, and the number of professional Chinese players on the tour, and the so-called curriculum focus that snooker has in China, it still hasn’t produced many ranking event winners.

No other Chinese player has reached the World final.

Liang Wenbo and Yan Bingtao are the only other Chinese players to have won ranking events, with the young Yan Bingtao, this season, now 20, having lifted the Riga Masters as a teenager.

The UK now is “home” for many foreign players…

Ding Junhui leads the way in snooker in China, but a lot of Chinese players travel over to live in UK, in places such as Sheffield, the home of snooker. There are top rate Academies (to which Ding has put his name to) there where anyone with a serious desire to become a pro can go to study their craft.

Top snooker veterans predicted well over 10 years ago, that over half of the top 16 players would be Chinese.

So, despite the big numbers we get giving us the impression that China is snooker loopy, why has China not converted more of the players coming through into winners?

James Lake is a WPBSA Level 2 coach and he thinks he might have a simple answer.

Lake works in China and coaches at the Ding Junhui club in Beijing. 12 years ago, he said, there was a club on every street, but that was because of the rise of China’s snooker superstar Ding Junhui.

He said: “But at grassroots club level, its non-existent with zero competitions now and many clubs have closed here compared to 2008 because of (Ding Junhui) when there was a snooker club on every street. Some of those clubs are still open, BUT snooker tables have been replaced with pool tables.”

James Lake’s Ministry of Snooker: Find out more as well on Snookerhub and book your FREE strategy call: click here…

Lake has launched his new pilot online venture this year, along with his coaching in China, The Ministry of Snooker.

It’s designed for players looking for a balanced program which Lake describes is the first of its kind where there’s a balance between mindset training, technique, and more traditional methods. It is really designed to focus on the player’s needs, and not just a blanket coaching system that is used elsewhere.

Lake added: “It’s really the complete package, but with more of a progressive structure to it than most programs out there currently that work well, but tend to follow more traditional methods.”

Are you mentally tough?

He said: “My mission at MoS is helping players to become the person and player they need to be with a greater focus on personal mindset and mental toughness. A lot of players I spoke to have identified they need most help with that at the national / pro status goal level. Mentoring is just as important as coaching and I found these areas to be of most value to my players based upon their feedback.”

The mental area in sport, particularly snooker, way back, was frowned upon as some considered it to be viewed as a weakness if they sought the help of a mind coach. But more and more players are using mind coaches to help them deal with the mental aspects of playing top professional sport.

From those who have sought more mind coaching based systems, the results are encouraging, SnookerZone has heard on the grapevine.

Go to Snookerhub to find out what you’ll get when you book a FREE strategy call with James Lake’s Ministry of Sound – now: click here…

Lake tells SnookerZone that he’s not one for using training aids.

He adds: “i feel too much emphasis is being placed on them. I have never used one personally apart from a training ball from Aramith and it really acted as more of a hindrance than a benefit. But that’s just my opinion. I do, however, know of a couple of products coming onto the market that may change all that ;)” He teases.

Connecting the web of Amateur Snooker…

One aspect of snooker that Lake feels needs improving is League snooker.

At the moment, in SnookerZone’s view, league snooker seems to be a standalone aspect with no genuine appeal other than just the small incentive of winning a small trophy at the end of the season. But it doesn’t really provide any real progression on its own for those who want to go further. Amateur snooker appears to have lots of threads, but no actual firm connections.

Lake added: “When I grew up, it, (League snooker), was the foundation for all snooker players. Perhaps they could hold some play-offs – take the league singles winners and put them into some sort of progressive playoff event.

“Winners get a reward for free coaching or maybe an entry to q school. At least something they could stick up on a poster to inspire and create that interest. Amateur players like leagues, but nowadays, I find they tend to lose interest and motivation when there’s only a trophy at the end of it.”

Finally, Lake recounts the time when he was 3 – 0 down in a regional amateur final. What do you think happened?

He said: “I once won a regional final with a mate’s cue after my tip came off in practice right before. His cue felt awful, lighter with a much bigger tip. So i just accepted that I’d get smashed in the final. I wasn’t disappointed. 3-0 down after 25 mins. I went and had a good scream at myself in the toilets then the whole match changed from there. I made an 87 break in frame 4 and ran out a 4-3 winner. The most unbelievable match I think I’ve ever been involved in.

We could all do with a good scream now and then. So, go ahead and SCREAM…!

SnookerZone would like to thank James Lake for taking the time to talk to SnookerZone and we wish him well with the project The Ministry of Snooker.