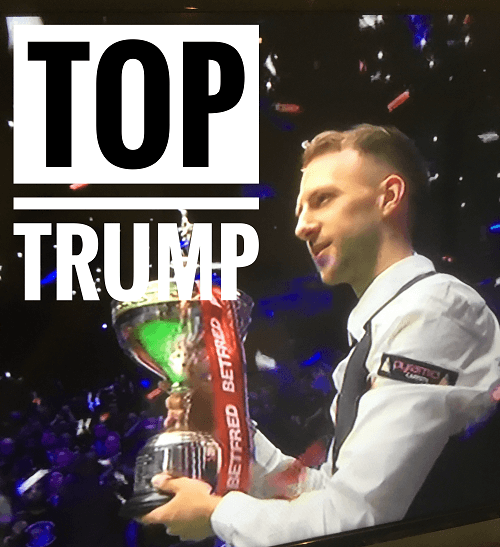 The 30-year-old winner of the Masters in January, and the World Championship in May, had high hopes of coming into the UK Championship as the hot favourite to lift a second UK title and be the fourth player to win all three majors in a year.

But it was an in-form and surprising performance from Bond, a 1996 British Open winner who rolled back the years with some dazzling snooker.

Trump said after he wasn’t surprised by the win as “Nigel was and is a good player”.

Bond said on the BBC after that doing a sideline of coaching all around the world was a “good distraction.”

He said he can’t do six hours a day practice now, but having a few frames with the younger ones at the Sheffield Academy was OK for him.

TRUMP NOT SHAKEN OR STIRRED…

Bond has the chance to reach a ranking event quarter-final since 2008 the China Open. But his last UK Championship best finish was in 2003!

The UK Championship runs until Sunday 8th December and Ronnie O’Sullivan could now be the favourite to lift a 20th Major Triple Crown.

2005 World finalist and Welshman Matthew Stevens is also having a good run in York reaching Round 4.

Bond could play either Gary Wilson or Joe Perry in R4. Wilson also made history in York with four centuries on the bounce in a best of 11 match.

.@Gary_Wilson11 becomes the fourth player ever to make four consecutive centuries in the same match!

John Higgins, Shaun Murphy and Neil Robertson are the others.

And Barry Hawkins made the highest break of the event, a 147, and takes away the 15K prize unless someone else doesn’t make another maximum before the close on Sunday.

That’s the fourth 147 of the season, but still requires 16 more before there’s a share of a £1 million prize pot!

The UK tournament top prize is a hefty 200K.