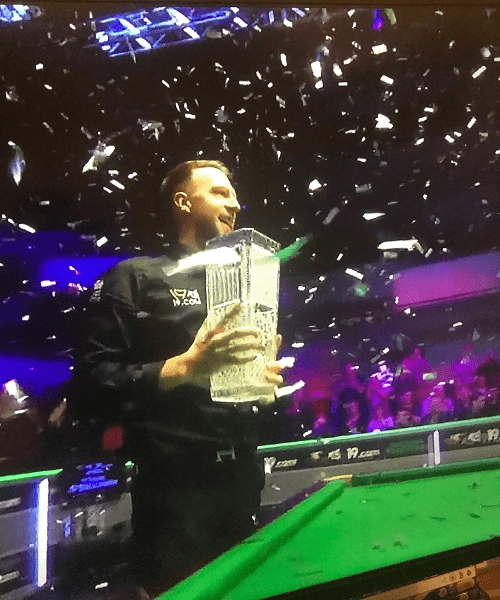 The 30-year-old’s prize money total for this current season so far has just topped the half-a-million mark as the Ace in the Pack has claimed three big titles already.

Judd started off the season winning the International Championship in Daqing, then, a few months later won the World Open but a few weeks ago. Now, he claimed his second Northern Ireland Open, defending the title from last season and becoming the first player to successfully defend a Home Nations title.

Squeezed in between that was his final appearance in the elite Champion of Champions final against Neil Robertson where he only narrowly lost 10 – 9!.

He bagged 70K for the win in Belfast and lifted the Alex Higgins trophy.

It was fitting that two of the World’s best appeared in the final again, as Ronnie was potentially on for a 37th ranking title, which would have put him on top of the list of ranking wins – beating Stephen Hendry’s 36.

Ronnie will be defending his UK Championship in York in a week or so time.

But Judd will have ideas of scooping the treble in York by becoming the fourth player to win snooker’s triple crown’s all in one year, including two in a season – that being the Masters, UK and World Championship.

Steve Davis, Stephen Hendry and Mark Williams have won the triple crown in the same year of two seasons.

It’s rare for current World Champions to have so much success in the season after scooping the World title, especially their first. Judd has got better and better since the World final where he steam-rollered John Higgins.

Ironically, the Juddernaut played John Higgins in the semi-finals in Belfast and outplayed John yet again in every department.

Trump is getting better and better…

A great acknowledging the talent of another.

Judd is riding the crest of a wave at moment, but it doesn’t look like his form will dip just yet.

York will be the next BIG test for Judd.

Watch as coach Steve Barton explains how to do Judd Trump’s impressive exhibition black he made against John Higgins in the semi-finals below.

Snooker first sport back on our TV screens in June…