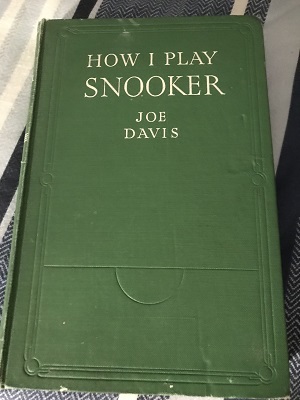 If you’re a beginner at snooker…

Then your VERY first book you should read is Joe Davis’s How I Play Snooker.

The book is very aptly called How I Play Snooker for that very reason. It’s how Joe Davis played snooker.

Some top snooker players have called it the “bible of snooker” because it is one book that crams everything in on how to play the game, according to Joe Davis.

Of course, the CAVEAT with this book is the title. It’s how Joe Davis played the game. So, a lot of what you read in the book may be slightly DIFFERENT to how you apply the BASICS when you play on the table yourself.

The book is like a CRASH COURSE in snooker basics. Everything from…

As repeated already, some of these principles that Joe talks about in the book you may need to adapt to suit you, and so this book is a STARTING POINT – NOT a definitive guide on how to play the game.

Let me give you one example.

In the book, Joe Davis talks about the bridge and how he liked to have a straight bridge hand that points DIRECTLY down the line of aim.

However, when SnookerZone bridges, he has his bridge at a slight angle because when we bridge straight, the thumb generally tends to move more and takes the cue off the line. This is what we mean by adapting what Joe is telling you in the book. Your bridge may well not be how Joe bridged. Everyone is different.

We’ve just reviewed the Aim Ball, a VERY useful training aid from DENMARK and one of the main points in Joe’s book is what SnookerZone indeed paraphrased in the review of the Aim Ball.

Here’s a quote from the great Joe Davis himself: “Striking the cue ball just where you want, and intend to strike it is perhaps the most difficult aspect of the game, certainly the most important. You think you are striking dead centre: Generally, you are not.  You think you are striking down for screw and the ball doesn’t take any screw, simply because, although you swear you struck low, you didn’t!”

Joe was then saying you, therefore, require a level cue action that will not deviate from its path to the chosen target on the white. This is where the Aim Ball will help because as Joe so rightly says in the book, ensuring you are striking the cue ball on your intended target on the cue ball with your cue tip is VITAL.

Joe Davis and the rest

If you’re looking for some tips with rest play in this book. Then you will be slightly disappointed as the section on rest play is thin on the ground. Indeed, Joe admitted in the book he was not a great rest player and so, the tips in the book are BASIC and SKIRTED OVER.

All in all, this book is VERY MUCH a basis for a very beginner snooker player to get an idea of what they need to do to improve but as said before, you will need to go and APPLY and ADAPT some of the techniques in the book yourself and not take everything Joe says as GOSPEL.

One of the most important takeaways of the book SnookerZone feels is the part which we’ve mentioned already. Learning to cue the white ball where you intend.

If you can master that, then it’s half the battle already!

In all honesty, FRANK CALLAN’S book is slightly better!

SEARCH FOR THE CALLAN OR DAVIS BOOK ON EBAY HERE – NOW…

PS: Joe Davis passed away in 1978. His legacy lives on in this book though…