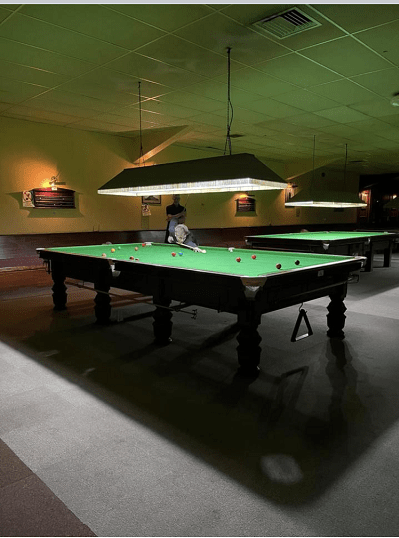 How easy is it to form a local league snooker team in 2021 and beyond?…

IVAN ASTIN, who plays in the Byfleet District Snooker League in Surrey, talks to SnookerZone about how he came to form the new current Woking C team out of Woking Snooker Centre for the 2021/2 season, currently playing and top in Division 2 after three wins out of four.

Local league snooker across the UK is back in some form or another.

Although it’s been a difficult 18 months for leagues and clubs, the drive for some to form a local league team has still been there.

And it’s been tough enough for some leagues and teams to get up and running for the new season amid the chaos of restrictions and the pandemic.

Astin, 31, said he was a late bloomer to snooker as he only started playing around three years ago at Woking Snooker Centre in Surrey. But regardless of what age you are when you start, once you get the bug for the game, it never leaves you.

He added: “I have been seriously practicing and playing for about 3 years max. I got annoyed from constantly getting beat by my at the time father-in-law with a 60 handicap and picking balls out of pockets for him. It drove me to improve. Now I can win frames off scratch off him, but he is still a much better player.”

Astin remembers his first tournament, which was when he took himself off to one of the other Surrey-based clubs, Frames Academy in Coulsdon with his now team partner Adam Hill and got his first taste of tournament handicap snooker. He repeated the experience, getting beat in the second round, twice. But was proud of the start he made to his snooker odyssey.

He then got to the final of the Woking Snooker Centre handicap tournament a few weeks ago, put on every Saturday at the club since July.

So how did Astin come to Captain a Woking C team that is doing well in the Div 2 league so far?

He told SnookerZone: “When I was starting out my snooker, I used to go down to the club to practise alone. But as the environment is very open and friendly, I approached loads of people playing snooker and asked for frames. People would say yes, people would say no. I had a group of about 12 to 16 people I knew would be up for frames.

He added: “It occurred to me a lot of these people I was playing would be prime candidates for a team form up and with conversations about whether people would be free and interested in league snooker. I created a pool of players I thought could play and have fine tuned my team down to 3 other very capable players, including myself.”

Friendships can be formed. League Team partnerships can happen. Ask to play a few players down at your local club. There’s nothing to lose. Either way, you’ll improve.

This was how SnookerZone came to be acquainted with Astin, who approached us for a few frames and we then made it a regular thing for a while on a Sunday before the pandemic struck and other things got in the way.

Astin is a huge fan of the 2010 World Champion Neil Robertson, and even donated a painting to Woking Snooker Centre of the man from Melbourne.

Get a good quality club coach to improve your game – now…

Although Astin has had no official coaching, or used training aids, he said: “I have been blessed in this department as no is the answer. But I am good friends with many guys down the Woking Snooker Centre who are top players. Three guys play out of the Byfleet Premier League and have helped me to improve my game massively. James Cullen, George Heatley and Paul Jackson.

ALL these players have been winners and finalists of the regular weekend handicap tournaments put on since July at the club when the Covid-19 restrictions were lifted.

And Astin’s ambitions are very modest.

He added: “To continue to improve and become more consistent. To see where that gets me in time and take each season and tournament as they come. I would love to say that I could captain a team I have built up from Div 2 to the Premier Division, but I’m not stupid. I need to improve a lot more if I am to do that as a worthy member of that team. “

When asked what professional player Astin would like to play, he said Jimmy the Whirlwind White because he believes they would have a good laugh from what he’s seen and heard of the ten-time ranking event winner.

So far, Woking C have done very well in the Byfleet League considering it is their first time as a new team formed in the League during these chaotic times.

But Astin believes that their wins so far early on will stand them in good stead for the rest of the season, giving them the confidence to push on.

He said: “With some very positive results recently and a home tie to follow on the back of a 4 – 2 away loss away to Staines Con D against who I believe will be a team to beat.”

The New Malden cueist added: “But there is a long way to go. I cannot be happier with our start to the season. It gives us a fantastic base moving on for the remaining fixtures.”

Browse Woods snooker cues and get 5% off with code SNOOKERZONE…

Do you think you could lead or play in a local league team like Ivan Astin?

Simply head down to your club and start playing. Get some good quality coaching. And then play with other people – if you can.

Email the local league/s in your area and find out more from those running them.

Thanks to Ivan Astin for talking to SnookerZone and good luck in the league for the rest of the season.

Copyright secured by Digiprove © 2021 Chris Gaynor
Facebook Notice for EU! You need to login to view and post FB Comments!