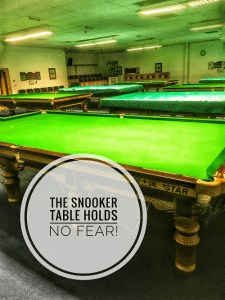 If you’ve ever played a frame of snooker, then you’ve probably been put at some point in a tricky snooker and then wondered how on earth you’re going to get out of it. I bet I’m right, right?

At first glance, it looks tricky and difficult to know what to do, but…

There are lots of ways you can make life easier when you are faced with a tricky snooker.

On a snooker table, there is generally a rule of thumb in that when you hit the cue ball off a cushion it will bounce off on the same angle as it came on! So, when you’re faced with escaping from a snooker, always decide if there is a natural angle first you can escape from. That said, if there isn’t, we’ll go into that in more detail, later…

If you’re snookered on a ball, you should, as a rule, look for any spots on the table (not always the spots of the colours) but you should look for spots which can act as a guide for you to get close or hit the ball you’re escaping from. For example. if you were to put a red ball behind the blue spot, with the blue on its spot, and then, put the cue ball in baulk directly where you’re snookered, then you could look for a line or spot that will get close to hitting the red.

3) Don’t panic when you’re in a snooker

Although this may sound obvious, a lot of people first panic when they are encountered with a snooker. This means they’re not focused enough and are unlikely to make a logical decision if their mind is filled with panic! It’s a lot like when your mind is not on the pot. If you are distracted when potting a ball, then the chances are, you are not going to pot it!

4) Analyse pace when getting out of  snookers

It’s actually useful to know this. When you’re snookered and a ball is closer to the cushion that you need to hit, then you need to play with less pace. For example, if a red is near a cushion that you want to hit, then logic will tell you NOT to hit the cue ball too hard, as, if you did strike too hard, the red would come away and leave your opponent a potential pot! If a ball is in the middle of the table that you want to hit, and you’re snookered, then you need to consider striking with a bit more power to ensure the ball goes onto or near a cushion.

5) Make Sure you get the object ball safe!

If you’ve ever watched the game on TV, then you will always hear the commentator say this: “It’s not the hitting it that is the problem, it’s getting it safe!” There is no point in escaping from a snooker but then giving your opponent a chance to make a break and win the frame. When you escape from a snooker you need to think about where the object might be going and part of that is about what we mentioned in a previous post about learning angles and how the table works. Learning snooker trick shots is actually useful because you are learning angles, judgement of pace and how the table reacts. Plus, it’s fun: start now, here…

Here’s a useful and easy exercise to do:

Spend ten/15 minutes just with the cue ball knocking it onto the cushion from different angles and learn and memorise how the cue ball comes off the cushion. Then, see what happens when you play with side, and how the angle changes.

This will help you understand what the white ball is doing and reacting to on and off the cushions.

Then, you can introduce another ball and practice trying to get the white to hit that ball without having any other balls in the way. Build up slowly for then placing a ball so you are snookered!

Spend at least twenty minutes on your sessions doing this:

Place the black on its spot, and then the cue ball in the D area and then see if you can get the black ball safe on different areas of the table. See if you can hit the black indirectly by using cushions and see what happens when you use different variations of pace!

Here, WATCH coach Steve Barton explain the basics of getting out of snookers in the video below…

PS: Much of what has been discussed here regarding getting out of snookers, also applies to putting your opponent into a snooker. Just follow the guides and you’ll have much more success! Remember: you need to practice these things! So get on the table and start now!