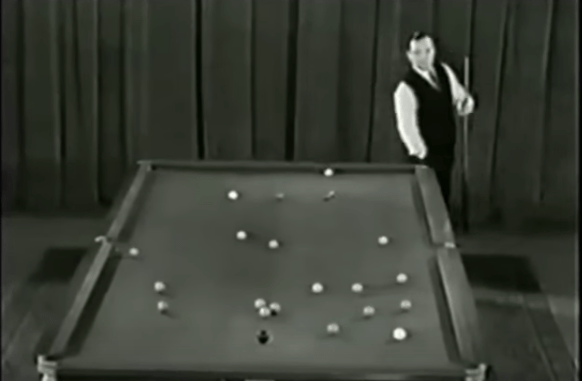 He was the pioneer of snooker technique and all facets of the game. He could pot balls. In fact, he was the first player to make a TV century in 1962. He also could play very good safety.

In fact, Joe’s TV century was one of SnookerZone’s very early memories of snooker. He remembers it well. Watching Joe’s ton on a VHS video called Snooker’s Century Breakers. The greatest hits of some of snooker’s top tons. Joe Davis’s brother Fred, also appears on the video, described as the “grand old man.”

Before the snooker boom, there was a game called billiards. Joe was good at that too. But billiards was not a great spectacle for TV, so snooker became the go-to viewing for cue sports fans. The 70s brought it to the fore with a tournament called Pot Black. The boom had begun

The game has evolved a lot since the 1970s when it first became a craze. Everyone was going snooker loopy. Clubs were opening in their droves. Players were becoming huge celebrities. The World Championships then became televised in full at the Crucible Theatre, Sheffield in 1977. Snooker was in a boom.

[bctt tweet=”Here, I will explain how playing snooker has developed since the 1960s. This includes:” username=”@chrisgaynor2″]

Snooker in the 1970s – Safety and tactical play…

Although the aesthetics of snooker have not changed at all, the way the game is played has.

Safety and tactical play have evolved a little since the 1970s.

Former Six-times World Champion Ray Reardon understood the safety. He realized you could make opponents make mistakes. Through those mistakes, players like Ray could then open up the game and score more.

Through the era of the 70s/80s, the game continued in this vein. Safety was the bread and butter of a top snooker player’s diet. To be able to play good safety, you needed to get your opponent in big trouble. And then take your chance when you got it!

You achieve this by leaving the cue ball on the baulk cushion in a difficult spot, so your opponent can’t pot a ball! And then, leave you in.

Fast forward now, and there has been developments. What has evolved now is players’ and their long potting skills have become much better. Players are going for their shots more. The balls are being opened up much earlier so that players can win the frame quicker.

Top players like Judd Trump enjoy forging their own chances to win frames. But he also learned the art of great tactical play and shrewd safety.

The first player to put this idea into action was the young Stephen Hendry in the 1990s. Hendry was the youngest player to win the World Championships at 21. His way of playing aggressive snooker changed the face of the game. He was keen to open up the balls as early as possible and then win the frame.

Safety and tactical play were not on his radar. He could play it, but he didn’t enjoy it.

Yesterday’s players could make century breaks. But only 8 centuries were recorded at the 1977 World Championships, though.

Now, after the 2019 World Championships, a record 100 centuries were made, beating the record of 86. This shows how potting and break-building has overtaken the importance of safety in the modern game.

World Champion Judd Trump made no less than 14 tons in the World Snooker Championships 2019. That’s just over double made in 1977!

Neil Robertson of Australia is the only player so far to make over 100 tons in a season with 103.

Since the 1970s, there have been lots of great safety players who are terrific potters as well. These include names such as…

Ray Reardon was one teacher to the modern greats such as Ronnie O’Sullivan at safety and tactical play.

How snooker technique has evolved since Joe Davis…

We return now to Joe Davis and the final part of this article. Technique. Joe Davis even wrote his own books, and the most popular one is How I Play Snooker.

The book is the starting point for learning how to play snooker. Players such as Steve Davis swore by it, calling it the bible of snooker books.

Joe had a very textbook technique. Some today call it old-fashioned, but it is the foundation for playing the game. So, let’s go over the basics now.

Joe’s starting position was having a very short walk-in to the shot. Almost standing right behind it. He then placed his right leg onto the line of aim and got down with his left leg bent forward to the table. His right leg in front with a straight right leg. Joe also wanted to have his chin right down on the cue.

Nowadays, some coaches say that having the chin on the cue is NOT all that important. What is important, when delivering the shot, is you must keep dead still on the shot, with NO head movement at all. That’s still the philosophy now.

The modern player stands different. Most players stand square on to the shot, have a much longer walk-in to the shot (like Neil Robertson for example). They get down with a less straight bent right or left leg. It depends on how tall you are, but there is no right or wrong stance. Kyren Wilson, for example, bends both knees on the shot.

As long as your stance is comfortable and helps you deliver the cue in a straight line, then it’s fine. You will need to test your stance in practice.

So, there you go! This article has explained how some key aspects of the game that have evolved since its early boom in the 1970s.

The game is now global. And there are more coaches around who can show you the basics and get you to improve your game so you can enjoy it more.

Find a coach and get playing.- see some great coaches here…

And most of all, enjoy it!