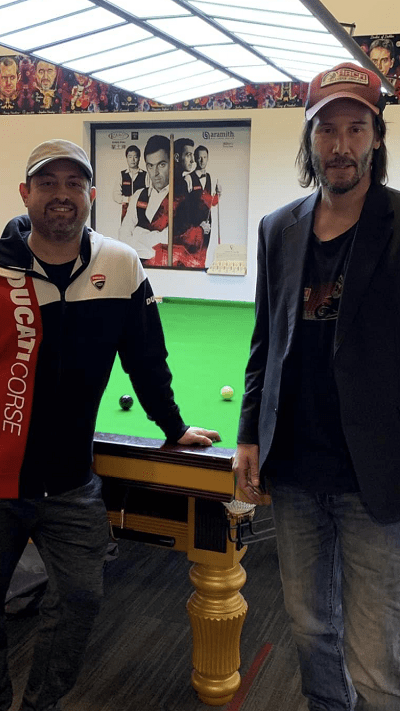 Reshaped quote from The Matrix – Neo to Morpheus: “I know snooker.” Morpheus to Neo: “Show me.”

Hollywood film superstar Keanu Reeves plugged himself into the snooker Matrix for a knock on the table at the Arizona Snooker Academy in the past few days.

The owner of the club, Romil Azemat, said on the Arizona Snooker Club Facebook page: “GUESS WHO WALKED IN TO PLAY SNOOKER??? Yes, KEANU REEVES I promised him to wait on posting until a few days later.

He added: I couldn’t believe it myself when I saw him walking in. He told me that it brought his childhood back as he used to play snooker back home in Toronto.

Reeves, 57, who’s appeared in the Matrix, Speed, and a string of other Blockbusters, is yet another celebrity and star who likes snooker.

Most recently in 2021, Reeves reprised the role in the Matrix films with Matrix Resurrections, the sequel to the third film The Matrix Revolutions.

The star appearance came as later on in the year, in September, Seattle will host the National US snooker championships at Ox Billiards as snooker in the US continues to grow steadily in popularity – as opposed to their national treasured cue sport of 9Ball pool.

Mike Dominguez, the proprietor of OX Billiards, told SnookerUSA.com how excited he is to host this prestigious Championship for the first time.

“One of our main goals for OX was to host the National Championship,” he said.

“We learned what was required to host the event and made sure that we kept to that script along the way to developing and opening OX Billiards.

Dominguez added: “The National Championship at OX is set to be an event like no other and we plan to make this year’s Championship very special indeed.”

Last year, Judd Trump was in Atlantic City contesting in the US Open 9Ball pool and also did an exhibition in Seattle.