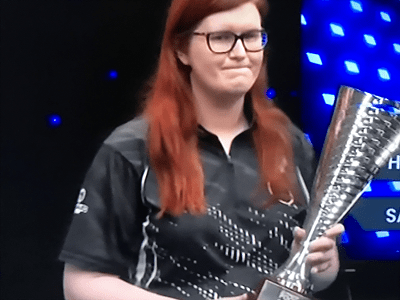 The start of the 2022 Ultimate Pool Pro Series of events ended with two legends and a recent IPA World Women’s pool champion, all scooping silverware in a dramatic weekend of televised action in Blackpool.

It was the first-ever Ultimate Pool Women’s Series event for 2022, with the final televised on Freesports, with the turnout capped to 84 players, as there were so many more who were eager to sign up to play in the event for Ultimate Pool. It just shows the sign that women’s pool is growing under the Ultimate Pool brand.

One such player was Sandy King, who only in the last years had picked up a cue, eventually made it through to the inaugural final of the Women’s Series and played Harriet Haynes.

After a nervy start from both, Haynes ended the stronger and is obviously the woman to beat in women’s pool at the moment as she pulled away in a race to 5 frames to claim the title 5 – 2.

Sandy King told Ultimate Pool after her return from playing in 2002, after more than a 15-year absence:

She chuckled: “It was everything I had expected…i,e, hard…

On a profile page about her, it reads:

She was selected to play for the England squad in 2020.

For Haynes, the run of unbeatable form continues after scooping a proud and fabulous IPA World title a few weeks ago under her belt and can begin a successful Ultimate Pool journey as the Women’s Series and events get bigger and bigger under the Ultimate Pool brand.

In the men’s events, there was a feast of big names as the cream of the crop rose to the top with the likes of The Golden Boy Gareth Potts, and the Magician Chris Melling contesting an Event 2 final to relish for the pool connoisseur.

Six-times World Champion Michael Hill got his Ultimate Pool career kicked off with a win in Event One to lift his first Ultimate Pool trophy.

Ultimate Pool continues to pull up trees as the game sees a mixture of fresh talent coming through, veterans returning to the game and new faces dominating the sport.

Harriet Haynes echoed the sentiment by saying after her win about the whole Ultimate Pool setup.