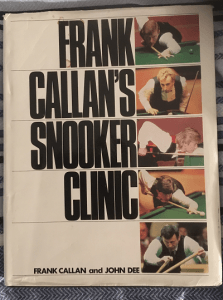 If you’re a beginner, then chances are there are two books you will come across at some point in your learning of this great sport.

One is Joe Davis’s How I Play Snooker and the other is Frank Callan’s Snooker Clinic. If you’ve never heard the name Frank Callan in snooker, then where have you been hiding?

Callan, sadly, is no longer with us in the snooker world, but was a coach to the stars such as Stephen Hendry and many others in the golden era of the game. His book Frank Callan’s Snooker Clinic is still as relevant today as it was yesterday.

His legacy lives on in many, as many of his techniques and views on coaching are still around today.

Callan’s Snooker Clinic is purely a training book. Each chapter deals with a specific area of the game and has neat diagrams and explanations for the particular skill explained.

Callan’s explanation of the DE theory was to explain the process by which a player discovers what their dominant or master eye is. It’s the classic put the chalk at the other end of the table and then form a circle with one of your hands out in front of you at the other end of the table and move your hand so the chalk fits in the circle. Then, close one eye, say, left eye – if you can still see the chalk then you are right-eyed, If you can’t then it will be left-eyed.

Callan advises in the training book that potters should then make sure they are looking at the object ball from their master/dominant eye on approach to the shot. This is exactly what SnookerZone does with each shot – is make sure that the object ball is in line with his right eye. The angle is much more visible when looking out of the master eye! However, there is no direct mention of putting your cue down on the part of the chin where your master eye is. Callan, to me, in the book, simply advises that some players cue better when their cue is under a certain part of their chin.

2) IS STANCE IMPORTANT? NOT REALLY, ACCORDING TO CALLAN

Interestingly, a lot is made of stance in snooker. Many coaches teach the traditional textbook wide approach of having your leading leg on the line of aim as being essential for the process of potting the ball. However, Callan’s view was that stance was not overly important in the process provided the player was comfortable and stable on the shot. Imagine someone trying to push you over but if you’re stable they’d find it difficult.

Controversially, Callan lends more detail to sighting than to stance in the book. As players, we are all different and have different body builds, so stance is a question for the player to find what’s comfortable and provides the most optimum position to deliver the cue straight.

As modern-day coach Nic Barrow says in his videos on Youtube, anything we do with regard to stance, grip, or bridge is designed to do one thing, help deliver the cue in a straight line on the line of aim! For example, SnookerZone has quite a wide stance and stands just off the traditional line of aim, but can still pot the balls to a reasonable standard. Case in point to Callan’s views on stance. It’s not the legs that do the potting, it’s your eyes!

Is It Worth The Read?

In summary, there’s many things you will learn from reading Frank Callan’s Snooker Clinic. The book is interestingly very similar to Joe Davis’s How I Play Snooker in that it is Callan’s version of how to play the game, but he certainly doesn’t agree with everything that Joe Davis or indeed others teach or taught in terms of the textbook topics on stance, sighting and others.

SnookerZone tip: It’s worth pointing out all these books, training aids, and videos are no substitute for having a one to one session with a good coach who can give further details on things covered in videos, books, DVDs and training aids…

Hurry! There’s Not Many Copies Left! Get your copy of Frank Callan’s influential and sometimes controversial Snooker Clinic, by clicking here