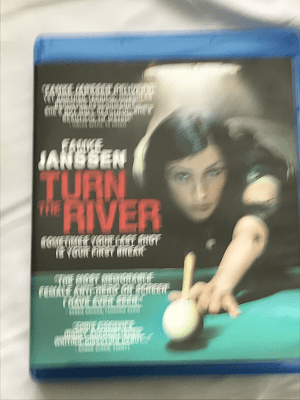 Although there’s not many snooker films around, there are actually a few pool films on DVD and Blu Ray and during SnookerZone’s period of immobility, due to a shoulder injury (and operation), we managed to get hold of a couple that we could review when we were feeling better.

The logline SnookerZone writes is simple: A pool shark, determined to win back her son must play the match of her life to raise enough cash to be able to take him away from a controlling father and stepmother.

Now, this film isn’t like The Colour of Money, starring Tom Cruise.

It’s grittier than that.

It’s less glamorous than Colour of Money, as we see into the world of a struggling female pool player, who literally SLEEPS at the pool hall struggling to make big money pool games.

But, what is great about this film is the relationships away from the pool table and how the viewer is drawn into them.

There’s the great relationship between Famke Janssen and her on screen son, Jaymie Dornan, (Gulley).

There’s the son’s tough relationship with the controlling father and somewhat naive stepmother.

And RIP TORN plays the pool hall owner, Quinette, who is willing to put a punt on Famke Janssen’s character, Kailey, being a winner in more ways than one.

This isn’t a rags to riches story like Colour of Money, and is quite emotional at the end. If you’re expecting a fairytale ending in this story, where the hero wins, you won’t get one.

But you do get raw drama with it, and in every family, there’s always a character who are torn between following what is expected of them in the eyes of society, to following their own dreams and wishes.

Famke Janssen, known for Blockbuster credits such as Golden Eye and Taken, plays the role with real grit. She’s not just a pool player, she’s a mother. And she wants what’s best for her son. Unfortunately, her best intentions, along with her actions, have dramatic consequences.

As a pool film, it’s definitely not your average. And there are not many decent snooker or pool films about. Colour of Money and The Hustler are classics, but SnookerZone enjoyed the grit and rawness of this film.

Worth a watch if you’re looking for something different away from the huge blockbuster-style films and want something grittier.

I actually preferred this film to the new film BREAK which we thought was predictable and not very imaginative in its story.