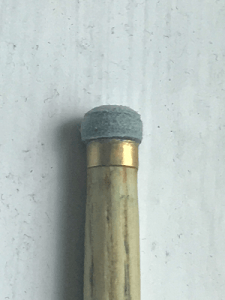 It may sound trivial, but it’s actually a very important part in sticking on a snooker cue tip.

If you’ve never stuck on a cue tip before, this is for you…

If you have, I bet you’ve experienced these issues, right?

All these are avoidable issues…

YOU ONLY NEED TO APPLY A SMALL AMOUNT

When using glue, the secret is to apply just the right amount so that you haven’t got the issue of having to wipe glue off the ferrule when it seeps down! That’s why SnookerZone recommends using a precision nozzle on glue so that you can apply just enough onto the surface wood to stick tip down.

We’ve tried so far these glues…

When trying to get the tip on, don’t use too much force. Just gently set the tip on and don’t worry if the tip is not totally dead centre. With some glues, you have just enough time to move the tip to centre it more than you think. However, if it’s not totally centred, no fear as you can trim it down later.

ALWAYS USE DUCT TAPE AROUND THE FERRULE TO PREVENT MESS

When putting a tip on, it’s important you have some kind of tape around the ferrule so that glue does not seep down the ferrule and make it a mess. This also, as it happens, helps to position the tip centre but the main reason is to prevent mess!

For us, it creates less mess when applying and is just hassle free of any issues when removing a tip.

You want to use a glue that isn’t going to make your hands too sticky if you come in contact with it when applying the process to sticking on a tip.

Gorilla glue isn’t messy and provides enough time for you to center the tip exactly where you want it.

When comparing to Loctite, we found that with Gorilla, we had much more time to move the tip around before the glue set! Loctite was pretty much instant in sticking and you had no time to make sure the tip was right.

However, Gorilla glue is slightly more expensive than Bison, which is SnookerZone’s second recommendation!

Bison is very similar to Gorilla in that it’s not messy, but it does provide adequate time for you to set the tip to where you want it! The advantage of Bison is it’s slightly cheaper than Gorilla!

So, you’ve got great choices there!

Make your choice either by clicking here, or…