There may have been a mini storm blowing over Sheffield, but…

QUALIFIER Gary Wilson fired himself into the quarter-finals of the 2019 Betfred World Snooker Championship.

Wilson, 33, from Wallsend, pulled off a dramatic two frames from 10 – 10 to go 12 – 10. It looked like Selby was in for a comeback but steely Wilson knocked in a tremendous 90 plus break to book a place in his first quarter-finals at the World Championship.

Sheffield saw sunshine and showers, and although it was hotting up inside the Crucible, fans outside were just as tense and hooked to the conclusion as those lucky enough to get tickets inside.

If you’re ever lucky enough to get tickets inside the venue, you will witness the tension, the nerve, the steel of players as they play for snooker’s most coveted professional prize, the World Championship trophy, first won by Joe Davis back in 1927.

But, even if you’re not lucky enough to put your bum down on a seat inside the up to 1000 capacity theatre of dreams, then being outside, which SnookerZone was, is just as tense, nervy and exhilarating as being inside!

Fans cheered as Wilson made the frame-winning break and knocked the former World number one out of the tournament, another big scalp to have bitten the dust since amateur James Cahill knocked out Ronnie O’Sullivan on Tuesday early on!

What makes this more sweet for Wilson is the last time he played Selby was in the China Open a few seasons ago in the final and lost.

The Tyneside Terror, as he is nicknamed, throughout this match certainly terrorised Mark Selby with some outstanding breaks and some clever tactical safety play.

There have only been two qualifiers to have won the World title – Terry Griffiths in 1979, and Shaun Murphy in 2005.

Yet, Gary Wilson, a somewhat longshot may well have taken the confidence in that match with Selby to dare dream of being the third qualifier to lift the coveted title?

Self-Belief can be a powerful thing…

BELIEVE YOU HAVE WHAT IT TAKES TO BE THE BEST LIKE GARY WILSON?

First, you need a good coach to get you on the right track… 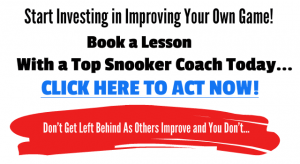 Watch: Mink Breaks off BUT that’s it…