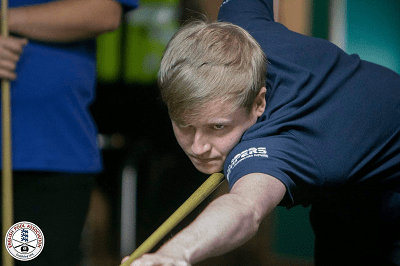 Every snooker and pool player looking to go far has had that moment where they are on the final ball/s to win, and had a rush of blood to the head and a flash of nerves and rush on to get the final ball potted.

It’s happened to us all at whatever standard.

For talent Luke Gilbert, that came in 2018 against a pal of his Enrico Forgione in the European finals where he lost 8 – 7.

He recounts: “It was a very good match. But I was never in front during the match and won the last couple to make it back to a deciding frame. In the decider, I got down to the black and at the moment, rushed the shot, ultimately missing and losing from that shot.”

For some, the memory can haunt them – whereas for those with the mental strength needed to succeed, it’s a case of getting back on the horse and going again.

He added: “This loss hurt a lot at the time and played on my mind, but with the help of snooker coach Brian Cox and local pool players Dom Cooney and John Roe, I was able to forget about this loss and work harder and harder on my game to improve and later that year is when I won the Junior World Championships.”

Luke Gilbert is currently competing in the Ultimate Pool Challenger series and is trying to finish in the top eight spots, currently fifth in the rankings, so he can be in there for next season as a pro. Good things are happening in the pool scene with the new Ultimate Pool Series of events which you can catch on Monday nights on Freesports channel 64 or on the UPS website.

But as Gilbert says, more can be done, and the biggest problem with pool he says, is…

Gilbert started, like all players getting into pool and snooker through his family, and playing in local leagues.

By 12, he was already winning, and helping his local league team to win matches. Then, in Huntingdon, he met coach Brian Cox.

He told SnookerZone: “In 2012, when my dad got me a membership down the local snooker club in Huntingdon, we met snooker coach Brian Cox. My dad got in contact with Brian to see if he would take a few lessons with me and try to improve my technique and game. I ended up working with Brian for 4 years, where he improved my game massive amounts. Brian also introduced me into the junior snooker tours and supported me along the way with them. My highest break at snooker is 115.”

WATCH: What is pressure and how do you deal with it?

He added: “The snooker World Championships are great to watch. It has a different atmosphere to any other event with the tightly packed in crowd. Unfortunately, I have never been to this event but when I attended the Master’s final in 2015, that was also a great atmosphere.”

So, in the world of pool, who is Gilbert’s toughest opponent to beat in his opinion.

He said: “My hardest opponent in pool is Phil Harrison, arguably one of the greatest pool players of all time. Phil is a local player to me and we play in the same team (Mickey Flynns). However, when I have played him in tournaments, he just doesn’t give you a chance. You have to play your best to beat him, which is how it should be.”

He told SnookerZone: “My next aim is to win a men’s tour event, playing plenty of them and I would love to go through one of the top sections and claim victory at the end.”

Catch Ultimate Pool on a Monday night on Freesports Channel 64 in the UK or the UPS website.

Looking for a good snooker or pool coach to get your game up to speed?

SEE the SnookerZone Coach interviews – including one with Brian Cox, here…

STAY UP TO DATE WITH SNOOKERZONE BY EMAIL OR PHONE…