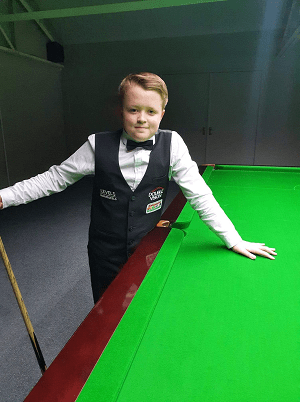 OVER the weekend, some top amateur snooker was taking place at the Northern Snooker Centre in Leeds where the 2020 EPSB Finals weekend was finally being played to draw to a conclusion.

It had been delayed due to the Coronavirus pandemic which has gripped the world and the UK since March 2020.

There were several categories with the Under-14s, Under 18s, etc.

But, as if that wasn’t enough, a day later, dedicated Stan was on the road again competing in a Pro-Am at the Ding Junhui Academy in Sheffield, the Home of Snooker.

For Dylan Smith,13,  also a teenage sensation learning his trade on the road, it was a night of entertainment playing Jimmy the Whirlwind White.

“The final didn’t go according to plan it’s fair to say, but I think we all know Stan is a great player, so well done there.”

Adding: “Dylan wasn’t really at the races, but he’ll be back stronger for it.”

Jimmy White apparently joked it was time for Dylan to take a break for a couple of weeks.

In the Under-21s, it was another proud moment for the player and coach team of Sean Maddocks and Neil Johnson, as Sean secured the double of the Under-18s and the Under 21’s title.

Neil Johnson wrote on his Facebook page that they were two tough matches, but Sean grittily dished up to secure them.

He added: “Great fightback from Jack (Harris in the Under-21s) but another gritty clearance from Sean got him over the line. Fantastic Maddo. We are all very proud.”

It was also a return of the World Women’s Snooker tour with the English Women’s Open, also held in Leeds.

She said after: “It was fantastic to be back competing again and great seeing everyone.

Next month, the 2021 UK Women’s Championship gets underway also in Leeds.

Snooker Coach with the Midas Touch in Liverpool…