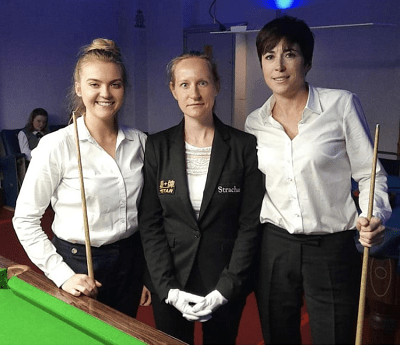 IT was a busy weekend for UK amateur snooker as the English Partnership for Snooker and Billiards (EPSB) bash out tournaments at all angles (excuse the pun).

You’ve got the EPSB Open Series which is a sort of Pro-Am, and into the mix is the new EPSB Women’s Tour events, which were being held at Scotties in Liverpool, the home of coach Neil Johnson’s stomping ground.

Neil Johnson, according to his Facebook, is now a coaching representative down south at Dunstable Snooker Club and is switching his time between both clubs.

She told SnookerZone: “I am over the moon to win. I recently lost my Nan and I won for her. I hope she would be proud.”

World number four Rebecca Kenna was knocked out in the last 16 of the event.

Parker also had a high break of 40 overall.

Never give up. Because great things take time.

Head over to https://t.co/K0dhPC7Y2B to find out how @emmaparker_147 juggles full time work and achieving her dreams.

We are proud of our athletes at the WSA and support every individual’s personal journey💥 pic.twitter.com/lgiRVY7VTb

Although Parker won, and the amateur game is appearing to be on the up, with events being bashed out here, there and everywhere, Parker’s coach Gary Filtness, said on his Facebook that the amateur game needed a brave shake-up.

It’s clear that Filtness believes there are more Seniors events being played than amateur junior events. His proposal was to split up the tour of 128 and create a proper 64 person amateur tour. Filtness, 57, said…

“Get these events on TV or streamed as these players need to start playing under pressure for proper prize money. Use, and pay some of the former greats of the game to help make it commercial.

He added: “The amateur game needs a leader with a vision, not afraid to shake it up a bit. Pay the right people the right money and you will get results.”

You may remember that SnookerZone interviewed Emma Parker when she appeared in the professional tour event the Snooker Shootout a while ago.