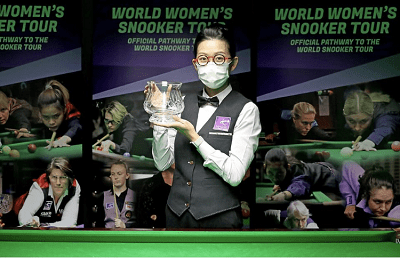 The two World Snooker Tour women met in the final of the 2021 Eden Women’s Masters at Frames in Coulsdon at the weekend, and it was a battle that saw Hong Kong’s Ng On Yee claim the title from 3 – 1 down.

It was a sweet victory for the 31-year-old who has three World Championships to her name as in the semi-finals of the event, she was almost down and out but battled back to win three snookers against Englishwoman Rebecca Kenna and book her place into the final.

It was Ng’s first title on the tour since her Belgian Open victory in early 2020 and comes after a series of defeats against the top men’s players on the main professional World Snooker circuit.

She also knocked in a ton (100) on her way during the event to take the high break.

If you believe it you can achieve it, that is my slogan,” Ng told the South China Post. “Both the semi-final and final, I was 3-1 down and I just kept on fighting.

Last Great Yarmouth ever, and went out with a bang. Champion of Champions 2021. 🎱🏆 pic.twitter.com/L2xrEkl4Mg

“While I was 3-1 down in the final, I just kept on believing. Because I did that in the semi-finals, so I believed I could do that again.”

Also, in the main event at Frames, Jasmine Bolsover, 22, from Woking Snooker Center competed, and managed to reach the last 16 on her first go back.
In the Seniors event, there was also success for Englishwoman Mary Talbot Deagon and Harriet Haynes had success by winning the Challenge Cup.
Haynes is also on the pool circuit and has recently won the Pool Champion of Champions and has also claimed it in 2018.
In the Under-21 category, Steph Daughtery, 20, claimed the title beating Zoe Killington 2 – 0.
Due to poor weather with Storm Arwen, some amateur events in the UK on the English Partnership of Snooker and Billiards circuit had to be cancelled.