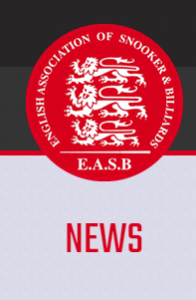 Aspiring professional David Lilley kicked off the English Association of Snooker and Billiards’s English Amateur Tour at the weekend with a win up in Leeds at the Northern Snooker Centre.

The tour runs throughout the season with six events, with the winners seeking FREE entry to QSchool – that’s if they don’t turn pro before that!

Last season, Joe O’Connor won an incredible four out of the six events then went on to scoop the English Amateur Championship at the South West Snooker Academy in Gloucester.

Lilley was also the proud leader of the highest break of 110 with Simon Bedford hot on his tails with a 103.

Last season’s semi-finalist in the English Amateur Championship Jamie O’Neill came close on three occasions to making a ton – 97, 96, and 91.

Joe O’Connor and Harvey Chandler made it onto the professional circuit last season, who will it be this season?