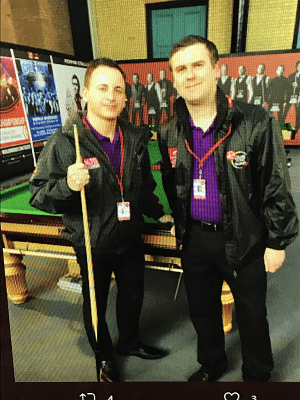 WST PRO ROOKIE JAMIE WILSON claimed the Cuestars U-21 event third leg at the Frames Academy Sports Bar in Coulsdon over the weekend.

The 17-year-old is a World Snooker Tour professional after he graduated to the tour from QSchool in 2020 but has been a regular on the amateur Cuestars circuit.

Aged just 16, Wilson was the youngest qualifier in 2020, and the youngest English player to ever qualify through Q School.

At least five coaches were present at the event on Sunday, including Brian Cox, John Woods, Tim Dunkley and John Hunter, all who had players playing in the Gold, Silver and Bronze events.

Wilson beat another Cuestars regular Oliver Sykes in the Gold, who SnookerZone had a brief chat with last week on the news he had been invited to the BetVictor English Open by the English Partnership of Snooker and Billiards later on in the year.

One of Brian Cox’s students, Aristos Pampouris, 20, knocked in a terrific 61 break in the final of the Plate against O’Shay Scott.

Cox, who is a friend of the website SnookerZone.co.uk, and also runs a successful junior programme at Frames, said of all his students who took part in the event: “All my junior pupils are coming on really well, from the younger ones to the older ones.

He added: “Not only do they have tournaments to play in but also lesson routines/award schemes/targets, etc. A few want to take it further.”

Cox said another of his students, Zain Jeraj, just 11, lost out on some blacks in the Bronze event, but added:

Zain claimed his first-ever trophy in the Cuestars at the U-21 Bronze event in Hampshire, Chandlers Ford a week or so ago.

There, he apparently hailed his coach Cox as “amazing.”

This was the third leg of the regular Cuestars U-21 events where there are events due next month in Salisbury on the 12th and Fareham on the 26th.