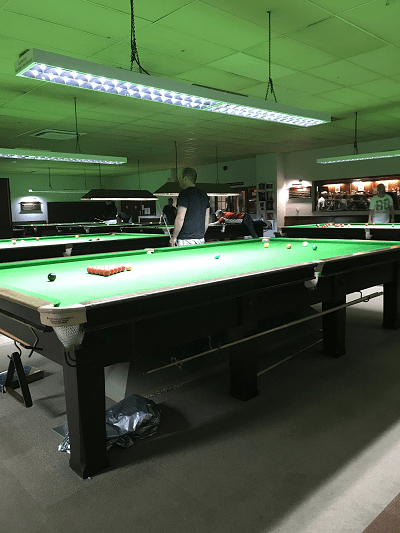 WOKING SNOOKER CENTRE hosted a second Cuestars event over the weekend  – the first since the Under-21s rolled in last year.

After seeing the Under-21s put on a show at the club in December, the first time a Cuestars was hosted since 2016, it was the turn of the Seniors tour, with players 40 and over pitting their wits with some more than 24 players turning up, including some local players from the surrounding areas of the Byfleet League and from the club itself.

Since the club has been managed by Peter Ruddick, everyone who has visited has commented how the club has improved in conditions for amateur snooker players with new modern lighting being fitted to the tables, upgraded and maintained tournament cloths, and, of course, a wide variety of top amateur players returning to play there.

SnookerZone has interviewed some, including the likes of Ryan Mears, Matt Ford, and the Woking female talent Jasmine Bolsover.

Yes, the Woking Snooker Centre is a great venue and a special thanks to the manager Peter and his staff. Also would like to thank the local players that joined Cuestars and took part in the event. 😀@chrisgaynor2 https://t.co/7aySIkCdvw

This place keeps getting better and better…

Hunter, who also plays in the Cuestars events and was on show in the event, commented on the club’s improving facilities, including the new table lighting at the first Cuestars event held there in 2021 since 2016, and holds the club in high regard. He said in a chat with SnookerZone when he saw the continued improvements going on since last time…

“Every time I visit this place, it gets better and better.”

The final of the event was between Dharminder Singh Lilly, of Fareham Snooker Club, who has won 7 Cuestars competitions in the past and has a highest Cuestars break of 141, including a Seniors tour win at Salisbury Snooker Club, and local Byfleet League star player Paul Ganley.

The Cuestars welcome all abilities and ages of players as events are put on all over the south of England. The events are played in a friendly but competitive atmosphere.

Woking Snooker Centre in Surrey has been going through a lot of changes in the past two years despite lockdowns and pandemics, with even more improvements coming in the next weeks – as the club continues to strive to be one of the best snooker club’s in the south with 20 tables, FREE PARKING facilities, and quality conditions for all.

Cuestars has produced a string of good players, some of which have gone on to play in pro events such as Oliver Sykes and also become professionals – such as Billy Castle and the recent latest addition to the pro circuit young Jamie Wilson.

And many of them have been braving the high standard in QSchool in previous years and this year – currently going on at Ponds Forge in Sheffield.

Not only that, but Cuestars also have a great training academy app filled with routines to improve anyone’s game, even SnookerZone’s, so check out the website and start your snooker game off in the right fashion.

Meet the Southern Snooker Stars of the Future – in 2022…