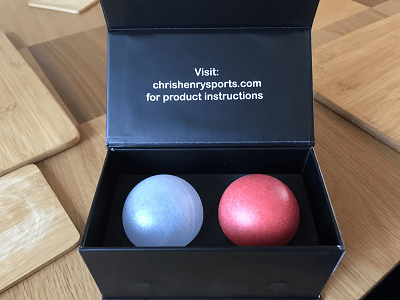 SnookerZone will get to review Chris Henry’s The Balls soon…

However, a friend and amateur league snooker player Michael Waring, founder of Snookerhub.co.uk  who lives 30 miles from Carlisle in Cumbria, kindly agreed to post a review of Chris Henry’s The Balls as he had recently purchased them out of curiosity.

Although Michael has only been working with them for a few weeks, they must have had some kind of impact on his game.

On Sunday, he told SnookerZone he had reached the semi-finals of his monthly handicap tournament at the Portland Snooker Club.

He added there are/were some very good players who attend the monthly competitions there.

So well done to Michael on his achievement.

At the UK Championships last year, there was a big feature about The Balls with the six-times World Champion Steve Davis who hooked up with Henry to find out more..

And Chris Henry is renowned for his psychological approach to coaching with players.

CLICK to watch the feature below AND then read Michael’s review after:

Get them here now

When I first heard about “The Balls” I will admit to being sceptical.

However, I saw lots of professionals using them and saw more and more about them on the internet and social media. Eventually, curiosity got the better of me and I bought a set.

Now, I am not what anyone would describe as a great snooker player. I’m 63 years old and what I would call club standard. If I make a 50 break, I’m over the moon – my highest ever being 58. I do feel that there is still time for me to improve though, so I’m always open to ideas.

When I first tried The Balls I wasn’t surprised when it showed me I wasn’t actually hitting the cue ball where I was intending. But the simplicity of Chris’s accompanying videos has already helped me to correct this. I’m only two weeks into using them and I am convinced that they will make a difference. My only regret now is that I didn’t buy them sooner.

Who is Chris Henry?

Chris Henry is a sports coach who teaches modern psychology and philosophy in a straightforward and understandable format. His clients include world snooker champions Stephen Hendry, Shaun Murphy and Mark Selby along with many other top professionals in snooker and golf.

What are The Balls exactly?

A red and a white that are roughly 10% of the weight of regular snooker balls. Oh yes, and they are weighted by having slightly thicker plastic in one part to give them a slightly heavier spot. This weight, being offset, is what makes The Balls unique.

What do The Balls do?

When you hit a ball, either the white with a cue or the red with a normal cue ball, they exaggerate any off-centre contact. Hit the cue ball with any unintended side, and the offset weight will mean it will not travel towards your intended target. Hit the red anywhere other than the correct contact point and the resulting error will be magnified by the offset weight in the red.

What will The Balls help correct?

This is the clever part of Chris’s system. By continually using The Balls, you will re-train your ‘visual cortex’ (the part of your brain that understands what you are looking at) so that, without changing the mechanics of your cue action, you will eventually hit the correct place.

If you think you are hitting the centre of the ball, but aren’t, move your aim. You will eventually discover where the centre is and what it looks like when lining up the shot. The accompanying videos and exercises explain this in more detail and are very easy to understand.

Are The Balls worth the money?

They are not an instant cure for aiming or striking problems, but I believe they can help if used correctly. The routines and assessments will highlight any areas for improvement and help you measure progress.

Overall, I think, yes, they are worth the money.

The snooker Youtube channel Break from Life also reviewed The Balls as well. Here is his take on it…

How to conquer milestones, and feel less pressure…