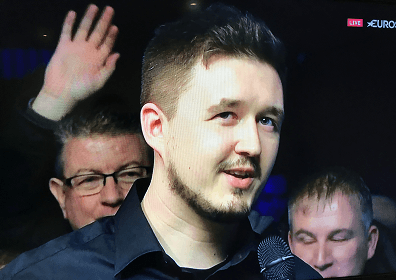 World Snooker Tour boss Barry Hearn has confirmed that from tomorrow the BetFred World Snooker Championship 2020 will be played behind closed doors.

Although, he said, that fans with final tickets should hold on to theirs a tiny bit longer. In this new world, things can change very quickly , he said.

The news came as Prime minister Boris Johnson announced live at 12PM in a Press Conference with the Chief Medical Officer Chris Whitty that there would be a squeeze on the brakes regarding the easing of lockdown measures as the R rate in England continues to rise again – particularly in the north.

Kyren Wilson gets a walkover…

Today, was the beginning of snooker’s Blue Ribbon event as 31 of the best snooker players battle it out over two weeks to lift the World Championship trophy and the 500K first prize.

It was announced yesterday that the 49-year-old Sheriff of Pottingham Anthony Hamilton had withdrawn from the event due to health fears – as there have been mixed views from fans and players surrounding Hamilton’s decision to not compete in the final stages having qualified for the Crucible days ago at the English Institute of Sport.

Hearn, talking to the BBC in the sunshine from Sheffield, said regarding the news that the event would now not be allowed to welcome spectators, said: It’s a kick in the lower regions, but I’ve been kicked there before, and I’ll get kicked there again, but it is what it is.”

He added that you can either go and sulk in a corner or get on with the job in hand.

“This is the World Championships, and it’s going ahead, said Hearn.”

Love him or hate him, he’s our PM and he makes the decisions…

Hearn said everybody behind the scenes had worked hard to be able to make the venue Covid-19 safe for visitors to return to the Crucible, but added regarding the PM’s decision, love him or hate him, he’s our Prime minister and he’s the boss and he makes the decisions.

15 months after Judd Trump won his first World title, he finally walked down those famous Crucible steps to the main arena on Friday morning at 10 PM to albeit a very different set of circumstances in a modest 200 plus crowd to defend his title against Leicester’s Tom Ford in Round One.

It was almost the perfect start for Tom Ford, who was on for a maximum break in the first frame but twitched towards the end and over cut a black.

Six times World Champion Steve Davis said that without crowds there might be a very different standard of snooker, as there is a different kind of pressure.

Some players may need the buzz of an audience though, he said, whereas others may not need it so much.

But from tomorrow, the experience by the next bunch of first-round players will be very different as the Crucible is without audience members.

It was a proud moment for 25-year-old Ashley Carty from Rotherham, who got to walk out to his Crucible debut on Friday morning as well to the small but enthusiastic crowd. He will have enjoyed that moment in the Sun.