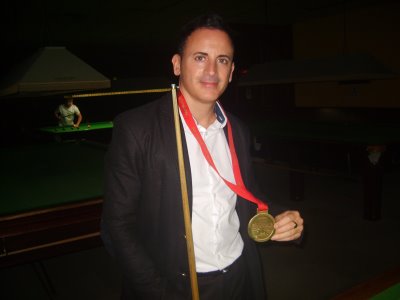 Top snooker coach Brian Cox has completed his second Marathon after battling through a stiffened Achilles around 11 miles in.

Due to the Coronavirus pandemic and lockdowns, the 2021 London Marathon, which should be run in April each year, where runners complete a grueling 26.2 miles, had to be delayed, but finally got off the ground at the weekend.

Friend of the website Cox, who coaches snooker at Frames Academy in Coulsdon and Woking Snooker Centre in Surrey, and gives SnookerZone a few lessons, and other venues across the country, 47, was running in aid of The Kirkwood Hospice in Kirklees, which supports people with life-limiting conditions.

He first ran and completed the London Marathon in 2016.

He was also running in honour of the great snooker player Paul Hunter, who died in 2006 of cancer.

The Coulsdon-based snooker coach had the pleasure of playing Hunter, a three-time Masters champion, a few times in practice and said it was an honour.

He was also running for his beloved Nanny Beryl, who sadly passed away in the lockdown from Dementia, and an Uncle Phil, suffering from cancer, and his sister Cathie, in remission from bowel cancer.

He told SnookerZone: “My Achilles stiffened up real bad around 11 miles so couldn’t run my normal pace but battled through the pain the next 15 miles.”

He completed the run 10.52 min/miles. That’s his second in the space of five years.

Every Cue Sports Player Has Gone Through This…