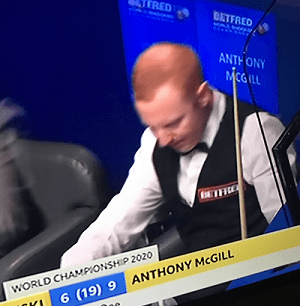 While the UK basks in a heatwave, the unusual summer drama at the Crucible is also bubbling up as the tournament enters its final stages.

The 2020 BetFred World Snooker Championship has produced some quality drama both on and off the baize, despite the fact that no audiences have been allowed in, but the tension has still been gripping.

Welshman Clarke was at one stage in the match 8 – 2 up on the Scot but let a lead slip after an unusual exchange where McGill complained Clarke was in his eyeline on shots. Subsequently, he confronted him off stage at the venue.

Once referee Jan Verhaas had given them a talking to after the second session, all was well again, although McGill looked sheepish on his entry into the final session on Sunday night.

On the baize, it was nip and tuck as both players continued to come back at each other again and again. Clarke towards the end was looking a wee bit tired in phases, at around 10 – 10, but pushed on.

McGill, who played Shaun Murphy in his maiden quarter-final in 2015, told WST: “I can’t believe I won that match,” said the 29-year-old. “Especially considering the position he was in at 12-11 when he missed the pink. My scoring wasn’t there, I felt like I only had about three breaks in the whole match. The only reason I won was that I tried as hard as I could. I’m going to need to pull something out of the bag in my next match.”

When McGill was asked about the fracas regarding the incident, he said: “During the first session, there were three or four shots where I was shooting down towards the black end in safety battles and Jamie was standing in my eyeline. I told myself to forget about it because he probably didn’t mean to.”

He added: “But I decided that if it continued in the second session I would ask him if he would mind sitting down or standing behind me. A shot like that came up and I asked him politely if he wouldn’t mind sitting down, because it is distracting when someone is standing up and you can see him. He took it the wrong way and it blew into a massive thing, when it should have been resolved in about three seconds.

“I didn’t have any intentions at all behind it. I know people are saying I was trying to unnerve him, but that’s not the type of game I play, you can ask any professional player. A lot of people might not rate me as a player, but nobody can say anything about my conduct at the table when it comes to sportsmanship.”

McGill will play Kurt Maflin as there is guaranteed to be a qualifier in the semi-finals of the event.

25-year-old Clarke said on his performance in the tournament.

“Even though I lost 13-12, I am very proud of myself. There’s a lot of tension out there and you have to take the rough with the smooth. It has been an immense experience.”

Watch the slight fracas below…