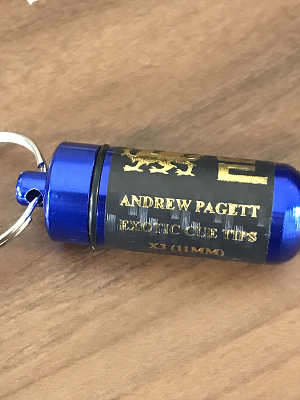 SnookerZone got to try out two tips so that we could compare two tips and see which one came out on top.

We had heard about new tips on the market AP Exotic tips and so we decided to purchase those.

Earlier on in lockdown, we had purchased a tin of the Mark Williams’ Legends tips XH.

Three-times World Champion Mark Williams is very meticulous with the kind of tip he plays with and has tried lots of tips in the past. He’s tried G5, Kamui, and a string of others.

So SnookerZone took both the XH variety of both brands and tried them out. But did they pass our five tests? Here’s our verdict:

The AP Exotic tip is firstly a rock solid tip. When they say XH here, they really do mean it.

In fact, on Facebook, Andrew Pagett commented on our reaction to the tip being rock solid and built like a brick, by saying:

“Sounds perfect. We aim to make it the hardest tip available, but with unbelievable spin with minimal effort. My tips do exactly what they say they do, unlike some other brands.”

The AP Exotic is much harder than other XH tips such as the G5 or GRAND tips. This is really an XH and strikes like a brick!

2) How well does chalk spread on both tips?

We also started using Century chalk over the weekend. Something we’ll be getting around to reviewing on SnookerZone. We found that this chalk held well on both tips. The MJW slightly held a bit more because it’s “softer” than the AP Exotic. If you’re looking for a “softer” hard tip then the MJW Legends is worth a try.

On Mark Williams’s use of tips, Andrew Pagett said: “Mark uses his own make. They are hard, but made out of original pigskin which makes it hard to get spin on the ball. Mine are made out of something else which makes it easier to screw back.”

3) How Responsive are the AP Exotic XH’s compared to the MJW Legends?

Given that the AP Exotic XH tips really are Extra Hard, and built rock-solid, we found that initially; it was a struggle to control with them. Even though we’ve reviewed G5’s and other “Extra-Hard” varieties in the past, these are exactly what they say on the tin. In this brand, SnookerZone would say opt for a medium or a hard if you want to stick with them and don’t want a rock-hard tip. After a bit of a knock-in, we slowly got used to the Extra Hards, but as we say, if you want something softer, opt for a downgrade in this brand of tip!

The MJW Legends Extra Hards were much easier to control and felt much softer than the AP Exotics. In fact, they felt like the Century G5s.

4) How long will the tips last?

5) How do the prices compare?

Not a lot of difference! Both tips come in three packs and are £20.

if you want value for the money in terms of what an XH is, the AP Exotics are definitely that.

For SnookerZone, they were way too hard for our tip feel, so we’ll be downgrading to a medium or hard in these.

In our next review, we’ll be reviewing POWERGLIDE tips in the medium/hard variety.

If you can cope with a rock-solid XH tip that really is XH, then the AP Exotics are the one to opt for.

However, if you like extra hard tips but don’t like them too hard that they are built like a brick, then opt for a MJW Legends, or a Century G5.

You can get both brands on Ebay here now…