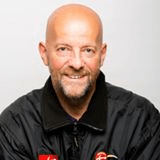 Not every person who takes up snooker wants or has the natural ability to turn professional.

Having said that, if you have desire and determination and are willing to sacrifice yourself to the cause, then you are at the start of a long road to reaching your dream in the game.

Add a great snooker coach into the mix–and you’re on your way!

Those who dare to dream, often reach the summit of their ambitions and as the film director Woody Allen once famously quoted: “80% of success is about showing up!”

In this exclusive Q&A interview with WPBSA coach David Horrix, who has written a string of successful books on the game, including recently the Complete Book of Snooker Shots, he explains to SnookerZone why some make it in this great game, and why coaching is very rewarding for him…

1)     Can you please state your name, age and where you are based and which club for the record?

My dad used to play snooker and as soon as I saw pot black in the late 60s, I knew I had to play that game. It was a long wait because you could not play snooker until you were 16.

3)  What made you want to get into coaching the game?

Over the years, I have helped many players because I always had an interest in the technical side of the game. The first player I helped in the 70s turned out to be a great player and many years later, he came to see me and thanked me for my help.

Realising the impact that I could have on players got me interested in doing it professionally. I also helped my son in another sport and he won just about everything that it was possible to win, so I figured I had an aptitude for performance coaching.

4)  Have you played in leagues, events and have you won any?

Of course, I played in local leagues and we had a great club side, with each player in the team being on the lowest mark and capable of making big breaks. I found that in matches my game improved and at the time people locally knew me as a good break maker.

In the 70s there were loads of juniors in the area and for 3 years I won the area junior championships. I moved to Birmingham in the late 70s and could compete with the best players in the clubs down there.

I have had a few centuries, but by today’s standards nothing at all. With practice (which I am probably never going to do anymore) I could get back into the 80s and 90s and I occasionally knock in 60s and 70s, but I rarely play games. It’s all coaching.

6) Who do you most admire in the game?

I admire a player in Pakistan who has no money, no help, but loads of ability and the best attitude. I am helping him now and he could make pro with the right guidance and a bit of luck.

7)  You’ve obviously written a few books, but if you had the chance to create a snooker product/gadget, what would it be?

I would love to create a gadget that made juniors as committed to playing and practicing as me and my friends used to be. When coaching is on, juniors enjoy it but very few have the burning desire to go into a club and put in the solo effort that’s needed to compete at a high level.

8)  Is there an actionable tip/s you could briefly give that would improve a player’s game now?

9)  What’s one of your best routines you teach that really gets a player thinking or even motivated to do more!

Players must be motivated, and that comes from within, not from a routine. However, I have 78 critical routines that I have developed and if players complete these, then they will be great players – none have so far!

10)  Is there any players you coach, who you think have a real chance of going far in game? Don’t name names if you don’t have to, but is there much talent coming through in your area/s?

I had one junior a few years ago who could have been a top 5 pro player, but his parents ruined that for him! I am in a very small club so in that respect, I have a disproportionately high level of success and have coached 2 world ranked players.

People often look at the big clubs and believe the coaching is better there because they turn out the odd pro player. However, if you can get some success when you don’t have the huge resource of a big club then you’re doing something right!

11)  Finally, can you reveal something people don’t know about you? A funny story or something snooker related on or off the table?

I have lots of funny stories but not for here! However, few people know that I have little or no time for the casual player. My focus will always be on performance players and that doesn’t mean only young players as I currently coach 70 and 80-year-old players who have a great attitude towards learning. If I think a player is only partially committed to snooker, then I don’t offer my coaching service for long.

SnookerZone would like to thank David Horrix for his time in talking to us.

If you haven’t read any of his books, you can pick up a copy of his book The Complete Book of Snooker Shots on Amazon, below. An essential for the serious player…