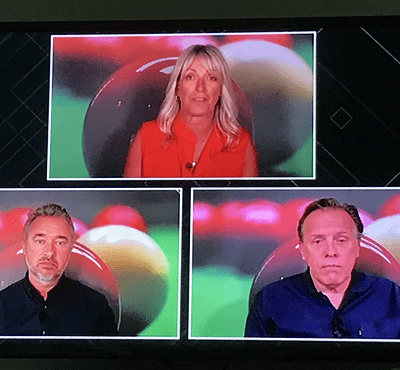 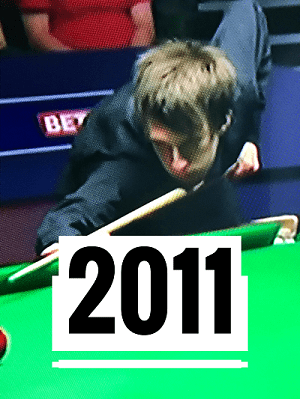 It was an emotional return for all on the World Snooker Tour yesterday as snooker became the first sport to hit fans’ TV screens at nearly 3PM in the afternoon on partial lockdown Monday.

In a historic 78 days since Judd Trump lifted the Gibraltar Open trophy, his record-breaking sixth ranking title in a season, the World number one graced the Marshall Arena in Milton Keynes with a slightly scruffy longer haircut and beard, and a bit of initial rustiness to his game.

But it wasn’t long before the 30-year-old Ace in the Pack was back to winning ways as he and David Grace from Leeds, were the first to appear on TV screens.

Trump went on to win his group and cement his leader board status in the 2020 Championship League. He’ll be back later on in the event.

It was also an emotional return for the team at ITV 4, presented by Jill Douglas, who welcomed viewers with a charming smile and said from her home: “Hello, and welcome to the new normal.”

She and the team of Stephen Hendry and Neal Foulds were hosting the show remotely from their homes as the commentary team of David Hendon and co were at the Arena.

Hendry had been bored…

Seven times World Champion Stephen Hendry and former World number three Neal Foulds, also reiterated it was good to have snooker back on our screens again, as Hendry jokily admitted he had been a bit bored during the FULL lockdown and had immersed himself in some box sets.

The World Champion Trump added: “Everyone involved has done an amazing job to get us underway, snooker is leading in that aspect. I felt it was important to set an example to come here, turn up and show my support for everyone who has tried to get this event on and everyone who has been involved behind the scenes. It would have been easy to sit back and made excuses and let other sports take the initiative but everyone behind the scenes has done an amazing job and put us at the forefront of sport at the moment.”

The Championship League runs from June 1st to the 11th, with the early stages having round robins as players battle to get as many points as possible and to top the groups. They are the best of four frames.

All the players and staff were tested for Covid-19 and the results came back negative, as there are strict rules in force at the venue.

No one is to leave the arena, and there are strict cleaning rules for the tables. Players have to use two sets of equipment in the back as rests etc are not allowed under the table. Social distancing measures are in place at all times.

Remember, if you are watching at home, CLAP when the players play a good shot as there is no audience!

Catch ALL the results, here…