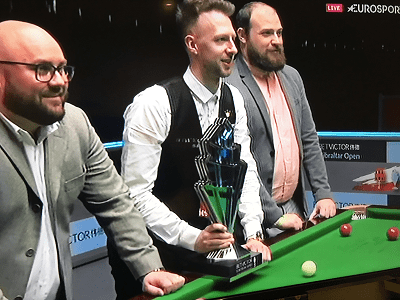 Judd Trump has completed an incredible feat on the modern snooker circuit.

The 30-year-old Ace in the Pack has lifted six ranking titles in one season – a huge feat considering the depth of the tour now.

A few weeks ago, Trump had added his name to that illustrious list. But has gone one better.

No handshakes. Only thumbs-ups or elbows.

Despite the sedate setting in Gibraltar, where the players had to play behind closed doors due to the coronavirus outbreak, the cream eventually rose to the top after a long week on the Rock.

There were no handshakes, just thumbs-ups or elbows.

It was the likes of three-times World Champion Mark Williams and Kyren Wilson who were in the last four, as the Warrior got the better of the Welsh Potting Machine to book a meeting with the Ace in the Pack, who scraped through a tough match with China’s Xiao Guodong.

The final, a best of 7, kicked off with three centuries in three frames, with Trump making two and Kyren one.

There were a couple of scrappy affairs in between, but it was Judd who also made a 144 to claim the highest break of the event, pinching £5K off his pal Jack Lisowski.

The Juddernaut, who won his 17th ranking title, claimed the £50K prize and nicked the £150,000 bonus off Neil Robertson, who was on course to claim the BetVictor European Series Cup.

There were no interviews after as custom during the presentation.