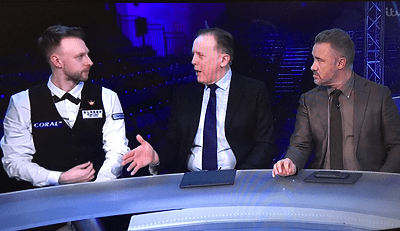 Age is just a number.

And in snooker, it is.

But it also counts for a lot when you manage to get to the sport’s most iconic venue The Crucible at a ripe age of nearly 50 – as have two “golden oldies” in Alan McManus and Anthony Hamilton.

The World Championship qualifiers have almost concluded at the English Institute of Sport as the first eight have booked their place to play on snooker’s big stage in Sheffield at The Crucible at the end of this month and into August. It will be 17 days of sweat, tears, and joy.

The final eight will be revealed today.

It’s the first time The World Snooker Championships will be played in a summer, due to the Coronavirus pandemic which struck UK shores in March and the government was forced to shut up most things from March through to June, with strict lockdown measures.

Among those qualifying from the first batch is Switzerland’s Alexander Ursenbacher, who particularly shone over four rounds of qualifying with wins over last year’s semi-finalist Gary Wilson and Andrew Higginson. The 24-year-old will be making his debut at the Theatre of Dreams.

Ursenbacher told WST; “To be the first-ever Swiss player at the Crucible is absolutely amazing,” said former English Open semi-finalist Ursenbacher, who knocked out Gary Wilson in the previous round. “I have always wanted to play at the home of snooker.  I’m surprised at how well I handled the pressure in the end.

He added: “I don’t care who I draw, I just want to go there and play and enjoy it. I just hope I don’t start crying. I am holding the tears back now, that’s how much it means.”

Two golden oldies with a combined age of 98…

Both ironically are just coming up to their 50th birthdays as they are both the grand ages of 49.

McManus impressively reached the semi-finals of the 2016 World Championship but lost out to an all firing Ding Junhui, but it wasn’t all Ding, Ding, Ding in that match.

Both Hamilton and McManus’s pro careers span some 30 years.

The other qualifiers from the first batch include:

Anything you do, I can do, too…