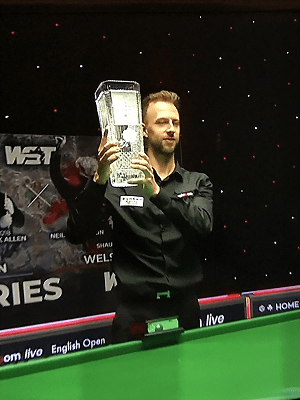 The Ace in the Pack Judd Trump claimed his 18th ranking title at the English Open at the weekend.

The 31-year-old came from 7 – 4 down after leading 3 – 1 at the mid session in the afternoon,  to see off a rampant Neil Robertson who made a 125 in the penultimate frame to take it to a tense decider.

Trump then potted a long ball off the break in the final frame and racked a ton of his own to seal victory in an eery, empty Milton Keynes venue – the Marshall Arena.

It was a case of anything you do, I can do too, and win…

Trump also will try to defend his Northern Ireland Open title in a few weeks’ time. 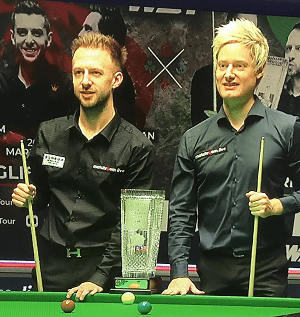 His win comes 7 months after a turbulent time off the snooker table with corona virus and lockdown restrictions interfering with sports and life where he won in Gibraltar, but then the Tour had to be halted.

He told Eurosport afterwards that he felt his game is there and despite critics claiming he went off the ball after lockdown, he said you can’t play well all the time.

He said he wants to pick up as many trophies as he can and he joked with six times World Champion Ronnie O’Sullivan after, “I think Ronnie’s won almost every title there is in the game.”

He told WST after: “It was an unbelievable final.”

“I never felt in control because Neil played tremendous snooker and scored heavily. I nicked an important frame at 7-4. I really had to dig in and I’m proud of the way I held myself together and made the break in the last frame. I was just looking for a chance, and when Neil left me the red I had to go for it.”

Neil Rovbertson said after that he felt really good and didn’t really do much wrong.

He added: “We were both bringing the best out of each other but he made a brilliant break in the decider. It’s great to be competing – the titles come as a consequence of working hard and applying yourself the best you can.”

Mark Selby claimed the first ranking event of the season winning the European Masters held at the same venue.